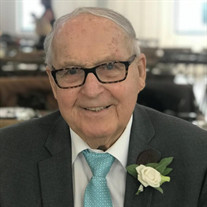 The service for Richard and his son, Kim, will be livestreamed here: https://vimeo.com/566661744 On Friday, June 25, 2021, Richard Lorn Robinson, loving husband, father, grandfather, and great grandfather passed away at the age of 91 with his wife Ila at his side. Richard (Dick) was born on July 24, 1929 to Ivan and Lucy (Matzdorf) Robinson in Berthold, ND. After high school graduation, Dick began working for Farmers Union Oil in Berthold. In 1951, he was drafted to the United States Army, where he served for 2 years in Austria. Upon his honorable discharge from the Army, he married his lifetime love, Ila Larson on November 15, 1953. He worked for a short time at Farmers Union Oil in Berthold and Minot. He then transitioned to Cenex Transportation as Regional Manager in ND and eastern Montana until his retirement. Dick and Ila moved to Minot in 1960. Together they raised 5 children: Diana, Kim, Cindy, Scott and Bonnie. Dick retired in 1991. He and Ila sold their home in Minot and alternated their time between their home at Lake Sakakawea in the summers and winters in Mesa, AZ. Ila and Dick spent many hours on the golf courses in both ND and Arizona, enjoying time with their many friends. In 2005, they sold their lake home, and moved to Fargo ND, where they lived during the summer. In 2019, they sold their Mesa home and lived year-round in Fargo. Dick's life was centered around family, faith and friends. He was so thankful for family and always saw the good in everyone. He was grateful for the many blessings in his life. One never saw Dick without a smile. He loved to visit with friends and strangers; his welcoming gift of conversation made others feel as if they knew him for a lifetime. Dick is preceded in death by his parents, brothers Donald and Jack, and son Kim. He is survived by his wife Ila, 4 children, Diana Johnson, Cindy (Chuck) Koenig, Scott (Marcia) Robinson, and Bonnie (Bruce) Mitzel, and son-in-law Mark Hohnstreiter, Along with his brother, Garland Robinson and sister Joyce Zook. As well as 11 grandchildren and 8 great grandchildren (with 2 more great grandsons due in September). A funeral service will be held on Wednesday, June 30 at 10:30 am at Olivet Lutheran Church, Fargo ND. A memorial service will be held on Wednesday, June 30 at 10:30 am at Olivet Lutheran Church, Fargo ND.

The service for Richard and his son, Kim, will be livestreamed here: https://vimeo.com/566661744 On Friday, June 25, 2021, Richard Lorn Robinson, loving husband, father, grandfather, and great grandfather passed away at the age of 91 with his... View Obituary & Service Information

The family of Richard Lorn Robinson created this Life Tributes page to make it easy to share your memories.

The service for Richard and his son, Kim, will be livestreamed...

Send flowers to the Robinson family.