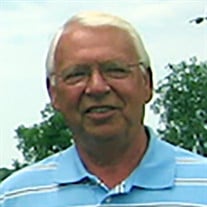 Dick and Vicki's service will be livestreamed here: https://vimeo.com/561474023 Dick passed away unexpectedly on March 13, 2021 in Green Valley, AZ. Dick was born in Fargo, ND on October 19, 1944 to John Christian and Ulrica (Bjorke) Gunness. Dick attended Abercrombie High School for one year, and graduated from Oak Grove Lutheran School in Fargo, ND. Known there as "Gunner," he was both an athlete and a musician, playing football, hockey and track and participating in band, choir and a boy's quartet as well as the senior class play. He earned an Associate of Arts Degree from North Dakota State School of Science and a Bachelor's Degree from Moorhead State College. Dick grew up in rural North Dakota in a small town with a large extended family. At the age of six, he was the salesboy for his brother Charles's monthly "Abercrombie Star," printed at home on a Swiftset type setting kit. He later worked for Gunness Brothers Automotive in Abercrombie, Standard Oil, and went on to own Broadway Service Station in Fargo. In later years, he worked for Lunde Auto Center, and also enjoyed driving the bus to events and competitions for student groups and athletic teams. The love of Dick's life was his wife of 56 years, Vicki Rae (Johnson) Gunness, whom he met at Oak Grove Lutheran School. She preceded him in death on January 9, 2021, leaving to prepare a heavenly home where the two of them can be together forever. Golf was another lifelong passion. Dick was known as "Silk" to his golfing buddies, a tribute to his smooth swing. Music sustained and nourished Dick's soul throughout his life. He was a baritone who participated in church choir as well as quartets in North Dakota. In Arizona, he sang in the Desert Hills Men's Chorus. He was a devoted NDSU Bison fan and loved to cheer them on. Dick could be a man of few words. His stillness reflected his deep appreciation for God's creation and the people he loved and cared for. Dick was a patient and tender husband, brother, uncle, and role model. As an AA Sponsor, he supported many people along their journeys. He was a loyal friend and a true gentleman. Dick is survived by siblings Charles (MaryAlyce) Gunness of Plymouth, MN, Dorothy (Kent) Lindsay of Helena, MT, and Cindy (Larry) Fuller of Sparta, WI; Linh Do (Scott Ulven) of Minneapolis, MN, who joined the family in 1979 via the Vietnamese Refugee Program; and many nieces and nephews. Memorials are preferred to Oak Grove Lutheran School in Fargo, ND or the Osterdalen Cemetery. A joint memorial service for Dick and Vicki Gunness is planned for 1:00pm on Saturday, June 12, 2021 at Oak Grove Lutheran School North Campus, with interment at Osterdalen Cemetery. Memories and condolences may be shared at www.hansonrunsvold.com. Arrangements by Hanson-Runsvold Funeral Home - Fargo, ND

The family of Richard "Dick" Olaf Gunness created this Life Tributes page to make it easy to share your memories.

Send flowers to the Gunness family.