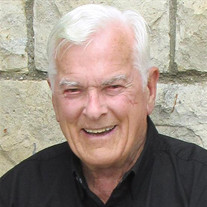 Richard L. “Dick” Currier, 93, of Fargo, ND passed away surrounded by family on Thursday, February 13, 2020, at the Villa Maria Nursing Home in Fargo. Richard L. “Dick” Currier was born June 23, 1926, in Minneapolis, MN to Joseph and Marguerite (Griffis) Currier. He grew up in the Cities and graduated from Washburn High School and the Minnesota School of Business, both located in Minneapolis, MN. Dick raced cars while going to high school and actually won at the Minnesota State Fair without his parents knowing he raced. Dick served in the U. S. Army Air Corps and became a pilot. After discharge from the Air Corps, he received a commercial pilot’s license and instrument rating. In addition, he raced cars at state and county fairs in the Midwest for a Minneapolis race car owner during the 40’s and 50’s. Dick rode a Harley Davidson Factory Racing Cycle to ninth place in the USA standings. He was also a North Dakota Motorcycle State Champion. In 1948, he moved to Fargo and started Currier Motors with used cars and Indian motorcycles. He met and married Lorene Smillie on May 20, 1950. They had two sons, David and Daniel. In 1954, Dick became a Harley Davidson dealer. Dick then owned and operated OK Tire Store from 1956 to 1964, when he sold it. In the 60’s, he sold Cadillacs for Overvolds. Dakota Fence Company started in 1974, where Dick went into business with his son, David. He was very influential in the growth and success of the company. Dick was one with many ideas. Dick was very passionate about antique auto restorations and was involved with the Shrine Dusters out of Bismarck, ND. His hobbies included going hunting in western North Dakota with his sons and the grandchildren. He was best friends with his hunting black lab, Thunder. He loved to travel, ride motorcycles and fly airplanes. He also liked building large model ships. Each one of his grandchildren have a ship that he built. Dick was a member of the El Zagal Shrine, American Legion, Fargo Elks and First Lutheran Church. Dick is survived by his wife, Lorene; his two sons, David (Kay) and Daniel (Mickie) Currier; grandchildren, Joseph (Becky) Currier, John, Amy (Josh) Mickelson, Adam (Heidi) Currier, and Erica (Kyle) Argall. He has ten great-grandchildren. He is also survived by his sister, Margaret Grove. He was preceded in death by his parents. We believe he will be motorcycle racing or flying airplanes in heaven. In lieu of flowers, the family asks that you make a charitable donation to the El Zagal Transportation Fund that helps families whose children are patients at the Minneapolis Shriners Hospital. This was a fund dear to his heart. Visitation will be held at the Hanson-Runsvold Funeral Home on Monday, February 17, 2020, from 6 to 8 pm.

The family of Richard "Dick" Currier created this Life Tributes page to make it easy to share your memories.

Send flowers to the Currier family.