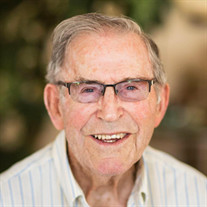 Richard's Funeral Service will be livestreamed here at 10:30, Tuesday, June 1: https://youtu.be/jjxhQdw0VDI Richard's Tribute Video can be seen and copies ordered here: https://www.tributeslides.com/tributes/show/DPYSLL9KCRLR4LKC Richard ‘Dick’ John Demro of Moorhead was 93 years old when he was welcomed into the kingdom of heaven on May 23, 2021. Born on December 1, 1927 in Nashua, Iowa, Dick was the youngest of the two sons of Nina (Hanson) and John Demro. He became a child of God when he was baptized at First Congregational Church and was later confirmed at St. John’s Lutheran Church, both in Nashua. Dick became an Eagle Scout as a teenager, graduated from Nashua High School in 1946, and apprenticed soon after as a bricklayer. He met Marge, the love of his life, when she moved to Nashua to help her brother and sister-in-law open a restaurant. Dick and Marge (Brandt) married on November 4, 1951 at Grace Lutheran Church in Fargo in the middle of a snowstorm. Dick and Marge’s life together was blessed with three children - Thomas, Kay, and Jane – and 69 years of marriage. While Marge spent her career teaching, Dick worked as a bricklayer, first in the Nashua/Charles City, Iowa area and then in Lawrence, Kansas before the couple moved back to the Fargo-Moorhead area where Marge had grown up on nearby farms. Dick spent most of his career working for Meinecke-Johnson and was a talented bricklayer whose skills were highly sought after. After raising their family and retiring from work, Dick and Marge spent many years collecting and selling antiques. When he was not busy with their antique business, Dick spent much of his time as an avid sports fan, primarily rooting for his favorite teams, the NDSU Bison and the Minnesota Twins. Thomas (Julie), Kay (Ken) Runkle, and Jane (John) Lottes treasure the wonderful father God gave them. Dick was a hardworking, loving provider who instilled the importance of faith, family, honesty and hard work. He was loved deeply by his 3 children; 11 grandchildren – Laura (Kamran) Khaghany, Joshua (Lana) Runkle, Anna (Luke) Fasoldt, Mary Runkle, John R. (Meg) Lottes, Christine (Jon) Zinno, Matthew (Samantha) Lottes, Anna (John) Snare, Mark Lottes, Cole and Cade; 9 great-grandchildren – Allison and Lexi Khaghany, Piper and Gideon Runkle, Lily, Zoe, and Anastasia Zinno, and Jack and Beau Lottes; and his extended family of siblings, in-laws, nieces, and nephews. Dick was a friend to many from Immanuel Lutheran Church in Fargo where he and Marge were charter members. He also relished friendships in Marge’s teaching group, their antique circles, and the neighborhood. Dick was friendly, funny, and always had a bright smile and quick wit to share with all he met. He was warm and wonderful and loved by all who were lucky enough to know him. Dick was preceded in death by his parents, Nina and John; and brothers, Robert and Maurice; as well as many of his brothers-in-law and sisters-in-law. In lieu of flowers, memorial gifts can be made to Grace Lutheran School in Fargo https://gracelutheranschoolfargo.com, Long Island Lutheran High School in Brookville, NY https://luhi.org, or the American Bible Society https://americanbible.org

The family of Richard John Demro created this Life Tributes page to make it easy to share your memories.

Send flowers to the Demro family.