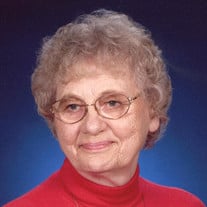 R. Inez (Henjum) Holman, was born January 19, 1926, in Cayuga, ND to Tina (Thompson) & Bert Henjum. She attended school in Oakes, ND and Breckenridge, MN. On March 15, 1947, she married Oliver F. Holman at Breckenridge Lutheran Church in Breckenridge, MN. They lived in Wahpeton, ND; on a farm in Pembina County near Walhalla, ND; in Dickinson, ND; and moved to Fargo in 1969. Oliver died November 22, 2004, and Inez continued to reside in Fargo until her death at Villa Maria Nursing Home on Saturday, May 18, 2019. Inez was a homemaker while raising three sons and helped with teaching Sunday school and their other activities. Once they were grown, she worked for several years at Herbst Department Store in Fargo. She was a member of the Order of the Eastern Star and the El Zagal Shrine Oriental Band-Aides. She also was a past member of Elkettes. Her favorite hobby was playing Bingo with her very special sister, Shirley. Her family was very important to her, and she was very proud of her nine grandchildren and five great-grandchildren. Inez is survived by two sons: David (Andrea) of Jonesboro, Arkansas; and Mark (Bobbie) of Fargo, ND; and nine grandchildren: Greg Holman of Fargo, Kimberly (Shawn) Bogart of Sioux Falls, SD, Heather Holman of Kansas City, MO, Lindsay Holman of St. Louis, MO, Justin Holman of Colorado Springs, CO, Ashley (Russell) Warnhoff of Colorado Springs, Kinley & Collin Holman of Jonesboro, AR, and David Holman Powell of Reno, NV. She is also survived by five great-grandchildren: Andrew & Elijah Holman of Fargo, Benjamin & Oliver Bogart of Sioux Falls, SD, and Terry Holman of New York City. She is also survived by her sister, Shirley Krogen of Fargo, ND. Inez was preceded in death by her parents, an infant son, and her son, Terry Holman. She was also preceded in death by three brothers and one sister. Memorials are preferred to the Scottish Rite Children's Language Center or the Shriners Hospitals for Children.

The family of R. Inez Holman created this Life Tributes page to make it easy to share your memories.

Send flowers to the Holman family.