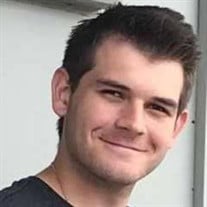 Peter's service will be livestreamed here: https://vimeo.com/659102206 Military Honors can be viewed here: https://vimeo.com/660441239 Peter's tribute video can be viewed here: https://www.tributeslides.com/tributes/show/WT6R3MB243CYZ2RK Peter Haakon MacIntyre Griffin left this world on the morning of Sunday, December 19 at the age of 22. Born July 29, 1999, to David and Mary Griffin, Peter was the fifth of six siblings. He was a hockey player, a hiker, an explorer, a saxophone player, a backpacker, a National Guardsman. He was a treasured son, brother, uncle, grandson, nephew, cousin and friend. He was a kind and gentle soul, with an infectious smile for everyone he met. When he was a child, Peter would often be found outside playing in his sandbox. His love for the outdoors grew with each passing year, and as a teenager and adult he spent as much time as he could at the family cabin in Cooke City, Montana. He loved searching for old mine shafts and riding four-wheelers through the wilderness. If you wanted to go for a hike or seek out any adventure, Peter was the ultimate wingman, ready for anything. While he loved big adventures like backpacking or exploring Europe, Peter took every opportunity to enjoy the outdoors with family and friends. He would play for hours with his nephew Ellis and niece Jude, exuding the kind of endless patience only an uncle can have. But also that was just Peter. He was steadfast and loyal. A guy quick to smile, quick to laugh and was always willing to lend a hand. He had an enviable quiet confidence and genuine kindness that is hard to find. Upon graduating from Fargo North High in 2017, Peter became the next in a long line of family members to join the Air National Guard. Following training and a year spent at NDSU, Peter took a full-time job with the Guard, working as a Geospatial Intelligence Analyst. He loved being a Happy Hooligan and he was so proud to wear his uniform. Above all, Peter will be remembered for his contagious smile, his huge heart, and his adventurous spirit. Peter was a man of faith who is now resting in the arms of our Savior. We will hold him in our hearts until we meet him again. Peter is survived by his parents David and Mary Griffin, Fargo, siblings Kaitlin (Tyler) Varriano, Colorado Springs, Connor (Moorea) Griffin, Fargo, Walker Griffin, Bozeman, Sarah Griffin, Bozeman, and Brita Griffin, Grand Forks; nephew Ellis, niece Jude; Grandparents Gerald Griffin, Grand Forks and Wayne and Pat Solberg, Fargo; as well as many aunts, uncles and cousins. He was preceded in death by his Grandma Karen Griffin. In lieu of flowers, memorials can be given to the Peter H. M. Griffin Memorial Fund.

The family of Peter H. M. Griffin created this Life Tributes page to make it easy to share your memories.

Send flowers to the Griffin family.