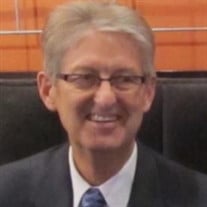 Paul's Memorial Service can be viewed here on Saturday, February 27, 2021 at 10:00 A.M.:https://vimeo.com/515939306 Paul Martin Swanson, age 77, Fargo, North Dakota, passed away on February 22, 2021, at the Sanford Hospice House surrounded by his wife and daughters. Paul Martin Swanson was born on July 6, 1943, in Fargo, N.D., to Fred and Ruth (Marshall) Swanson. Paul grew up in Wheatland, N.D., and graduated from Wheatland High School in 1961.He graduated from North Dakota State University in Fargo, N.D. in 1966. Paul worked in materials management at Sanford Health System (St. Luke’s Hospital, MeritCare) from 1965 until he retired in 2012. Paul married Bonnie Murdock in 1965, in Casselton, N.D. Paul and Bonnie have two daughters, Tammy Rae (Swanson) Burtness and Terri Ann Swanson. In 1994 Paul married Patricia Dirk and they built their home in north Fargo. Throughout his life, Paul loved the great outdoors in a variety of ways from enjoying the lakes for many years to hunting, fishing, and camping to maintaining his perfectly manicured yards. Paul had the utmost respect for the power of Mother Nature and said that while nothing is perfect, everything is perfect if you let Mother Nature take its course. In 2000 Paul traded in hunting to care for his pet parrots, Pepito and KeeKee, and rescuing injured birds/animals in the wild. Pepito and KeeKee brought out the big heart that Paul tried to hide. He might not admit to many that he helped save a family of bunnies that were abandoned by their mother in a storm. Paul loved being a mentor and teacher to the younger generation. Tammy and Terri might tell you it was not great fun learning about budgets every weekend in their preteen years, but all those long lectures likely added to the greatness of his daughters. Paul was an impressive instructor. He was always careful to guide youngsters to not do as he does, but to do as he says, such as teaching them to drive with one foot on the gas and one on the brake at all times. Paul coached his family, friends and colleagues on a vast range of topics from the philosophy of life to the appropriate way to organize a drawer. There really was not anything Paul could not do if he set his mind to it. He mastered electrical wiring when finishing his basement, could repair almost anything, cook a gourmet meal, and solve complex system problems in his career. Paul talked about loving his 47 year career in materials management because of the people. He enjoyed helping people realize their greatest potential and was clear that it was not about their education, titles or hierarchy but about individual human beings. Paul always fought for the underdog, and he strongly believed the underprivileged or less fortunate should have the same opportunities as those of different stature. Paul is survived and will be greatly missed by his wife Patricia, Fargo; daughters: Tammy (Barry) Burtness Fargo; and Terri Swanson, Williston, N.D.; three grandchildren: Ashley (Tom) Kading Fargo; Amanda Burtness, Fargo; Amber Burtness, Fargo; 2 great grandchildren: Hannah and Lucas (Tom & Ashley), sister: Millie Dahl of Overland Park, Kan.; brothers John (Judy) West Fargo; Roy, Wheatland, N.D.; and Robert (Lynn) of Las Vegas, Nev.; sisters-in-law Constance (Kim) Brust, Fargo; and JoAnne Dirk, Dent, Minn.; four brothers-in-law: Daniel (Coleen) Dirk, Grants Pass, Ore.; Douglas (Lisa) Dirk, Fargo; Michael (Doreen) Dirk, Riverdale, N.D., Andrew Dirk, Fargo; and Robert (Jennifer) Dirk, Fargo, and many special nieces and nephews. Paul was preceded in death by his parents; father-and-mother-in-law Mike and Leona Dirk; sisters June Reik, Florence Anderson, and Pearl Gross; and brothers-in-law John Reik, Clarence Anderson, William “Al” Gross, and Rick Dirk. Memorial service will be Saturday, February 27, 2021 at 10:00 AM at First Lutheran Church, Fargo, ND with visitation one hour prior to the service. The service will be livestreamed on the funeral home website. Memorials preferred to Sanford Hospice House, Fargo, N.D. Paul's Tribute Video can been seen and copies ordered here: https://www.tributeslides.com/tributes/show/D4FK7BW45B3KKT7J

The family of Paul Martin Swanson created this Life Tributes page to make it easy to share your memories.

Paul&#39;s Memorial Service can be viewed here on Saturday, February...

Send flowers to the Swanson family.