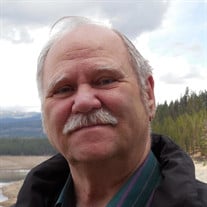 Paul's memorial services can be viewed here: https://vimeo.com/637588399 Paul's prayer service will be livestreamed here: https://vimeo.com/637119213 Paul Darryl Kegel, a life-long citizen of Fargo, ND, passed away from COVID-19 complications on October 15, 2021, at Sanford Hospital, Fargo. Paul was born at St. John's Hospital in Fargo to parents Fred and Grace Kegel. He grew up in south Fargo and graduated from Fargo Central High in 1964. He married Linda Dalbol in 1971. They had three children, daughter Paula, who died at birth, and sons Jason and Stuart. The family made their home in north Fargo. Paul worked at various jobs through the years, including Silverline Boat Manufacturing in Moorhead; Fargo Rubber Stamp Works; The Forum Newspaper, Fargo; Versatile Tractor in Fargo; and his last job at Kegel Sign Company in Fargo, where he was forced to retire early due to disabling health problems. Paul also served in the North Dakota Air National Guard. Throughout his life, Paul enjoyed building and flying control line model airplanes. He attended model meets across the country, including competing at the Model Airplane Nationals in Dayton, Ohio; Lincoln, Nebraska; and several times at Muncie, Indiana, which became their permanent headquarters. Paul was also a member of the F-M Skylarks Model Airplane Club, the Dakota Skymasters, and Valley R/C Model Club. Paul later fulfilled his dream of opening a downtown model airplane shop in first one, then a second larger location, after starting the business in his mom's basement and continuing it at his own home after he married. From his work with model airplane engines, Paul earned the nickname "Mr. Motor". People called and emailed him from across the country to work his magic on their engines that wouldn't run or had suffered damage from crashing. He loved all aspects of the modeling hobby, but he most enjoyed fellowship with other modelers. Paul was a member of First Baptist Church in Fargo from birth. He faithfully attended worship services and Adult Sunday School. As an adult, he held several offices including Chair of Trustees, Deacon, Financial Secretary and Property Chair. Paul could always spot a bulb that needed changing or something that needed fixing. His Christian faith sustained him through his many, many surgeries and health problems over the years. Paul is preceded in death by his parents, his brothers Fred Jr., David, and Stan; his infant daughter Paula, and his son Jason. He is survived by his wife Linda, his son Stuart, his nephews James and Jon Kegel and Stanley Kegel, Jr.

The family of Paul Darryl Kegel created this Life Tributes page to make it easy to share your memories.

Send flowers to the Kegel family.