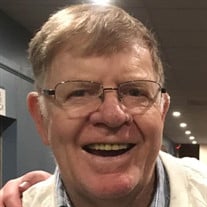 Paul John Haug, 82, West Fargo, ND, passed away on April 7, at Sheyenne Crossings. Paul was born on June 29, 1937, in Holmen, WI to Orel and Marie Haug. He was raised in Holmen, WI. In 1959, he married Barbara Ann Garver in Michigan, ND. Paul and Barb lived throughout the Midwest, settling in Fargo, ND in 1976. Shortly after they moved to Fargo, Paul became the owner of Custom Craft Furniture Restoration and Upholstery where he served his community and was an active sponsor for local bowling and softball leagues, and coached his sons in youth football through FM Athletics. While Paul loved the Green Bay Packers, his bowling leagues and watching his sons play softball and football, his favorite place to be was on the lake. Paul was a long-time member of the ND Sports Fishing Congress where he served as President and ultimately became a Director-at-Large from 2001-2017. Paul was an active member of the local sports fishing community and was highly involved in the Fargo-Moorhead chapters of Walleye’s Unlimited and Muskies, Inc. His roles in Muskies, Inc. included both local and national leadership including representing the Fargo Chapter as a Regional VP, was on the local chapter Board of Directors for over 30 years, as well as serving terms as both its President and Secretary. In 2001, Paul was inducted into the Muskies, Inc. Hall of Fame. In 2006, Paul was the recipient of an award of appreciation from the North Dakota Game & Fish Department recognizing his years of service to North Dakota fisherman. In 2017 Paul was inducted into the North Dakota Fishing Hall of Fame in honor of the work he put into promoting sports fishing in North Dakota. In addition to fishing, one of his greatest joys was his annual fall trip to Killdeer, ND to hunt mule deer with his sons, brothers and friends, as well as pheasant and waterfowl hunting in Crete, ND. Paul shared his love of the outdoors with his grandchildren and numerous nieces and nephews. Whether throwing kids off the dock for hours on end, teaching them how to hook a worm or throw a hunting dummy to his beloved labs, Paul was happiest spending time with his family and friends. Paul is survived by his children: Jeff (Carrie) Haug (Fargo); Kathy (Ron) Constantine (Chicago); Jim (Kim) Haug (West Fargo); Jon (Mariko) Haug (Fargo); along with grandchildren: Hana Ali; Abbie and Parker Haug; Nick and Mack Constantine; Jackson and Ben Haug and Reina Haug as well as his beloved dog, Peanut. Paul was blessed with numerous brothers and sisters; the late Jim (Angie) Haug, the late Bob (Nita) Haug; Janice (late Jim) Chrisan; Pete (Katherine) Haug; Sandee (Darryl) Winternheimer; Marianne Guist; Kathy (Gary) Schams; Tom (late Donna) Haug; John (Elise) Haug as well as his brother and sister in-law Robert (Veriena) Garver and several nieces and nephews. Paul was preceded in death by his wife, Barbara Haug, his daughter, Teresa Ali; his parents, Orel and Marie Haug and his in-laws, Mack and Margaret Garver as well as his brothers Bob and Jim and sisters-in-law Angie and Donna. A memorial service will be held at a later date. In lieu of flowers, donations can be given to the Great Plains Food Bank, care of Hanson-Runsvold Funeral Home, 215 7th St So, Fargo, ND 58103.

Paul John Haug, 82, West Fargo, ND, passed away on April 7, at Sheyenne Crossings. Paul was born on June 29, 1937, in Holmen, WI to Orel and Marie Haug. He was raised in Holmen, WI. In 1959, he married Barbara Ann Garver in Michigan, ND. Paul... View Obituary & Service Information

The family of Paul John Haug created this Life Tributes page to make it easy to share your memories.

Send flowers to the Haug family.