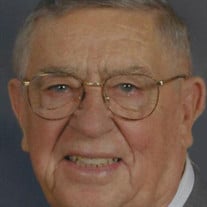 The Graveside Service for Otto can be viewed here: https://vimeo.com/user113354829/review/440130335/b675ac3bc4 Rev. Otto Walter Schmitt, 95, of West Fargo, North Dakota, died peacefully on Friday, July 17, and is now at home with his Heavenly Father. Born to Jacob and Albina (Bertsch) Schmitt on a farm southeast of Regent, North Dakota, on November 6, 1924, Otto attended elementary school in the rural school in Chilton Township. He completed high school in Mott, North Dakota. He graduated from Concordia College in Moorhead, Minnesota, in 1948 and married LaVerne A. Bolme on August 28, 1949. After graduating from Wartburg Theological Seminary, Dubuque, Iowa, in 1952, he was ordained into the ministry. He served parishes in Richardton, Gackle (where he preached in German at the Neudorf Lutheran Church), Max, and Cando, North Dakota; rural Northwood (Silver Lake) in Iowa, and Walcott (Richland), Colfax, and Fargo, North Dakota. In June of 2017 he celebrated the 65th anniversary of his ordination, for which he chose this scripture from Romans 8:38-39: “For I am convinced that neither death, nor life, nor angels, nor rulers, nor things present, nor things to come, nor powers nor height, nor depth, nor anything else in all creation, will be able to separate us from the love of God in Christ Jesus our Lord." Otto’s calling to the ministry came at a young age when he could be found preaching to the sheep in the pasture on the family farm. His desire to share the Gospel never waned, and he was often heard in his room and the common areas of Sheyenne Crossings doing just that – long past the time when he was able to see the words in his well-loved, well-read, and well-worn Bible. He was a man of many talents and hobbies – singing, building in his woodshop, gardening with LaVerne – even helping with her jigsaw puzzles. They were truly partners in life until his mission to care for her ended last year. Love for his family came second only to his love for God. Otto is survived by eight children: Terri (Roger) Olson, Timothy (Sherry) Schmitt, Thomas (Linda) Schmitt, Rebecca (Kevin) Leidal, Miriam (Scott) Hildre, Heidi (Jeffrey) Vansteenburg, Sonja (Kent) Casperson, and Margaret (Jon) Young; 24 grandchildren and many great-grandchildren. He is also survived by one sister, Ida Schmitt. He was preceded in death by his parents, Jacob and Albina, wife, LaVerne, infant brother Henry, infant sister Eva, sisters, Pauline Alma (Henry) Erlenbusch, Clara (Adam) Oberlander, Martha (Arthur) Frisvold, Esther Schmitt, Emma (Clarence) Kamka, Lydia Schmitt, and brother, Emanuel (Leona) Schmitt. Now you who have believed enter that rest, just as God has said. A private family service will be held On Monday, July 20, at Richland Lutheran Church Cemetery.

The family of Rev. Otto Schmitt created this Life Tributes page to make it easy to share your memories.

Send flowers to the Schmitt family.