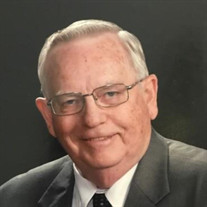 Orlan's memorial service will be live streamed here. https://vimeo.com/563290781 Orlan Joel Loraas, of Fargo, ND, passed away on Wednesday, June 2, 2021, after a short battle with lung cancer. He died peacefully with his beloved wife, Evelyn, and daughter, Kristina, by his side. Orlan was born on July 26, 1934, at his maternal grandparent’s farmhouse in Loma, ND. He was raised on a combination livestock and grain farm in Northeast Ramsey County, and he thought from an early age that farming would be his way of life. He excelled in 4-H and was rewarded with a trip to the National Club Congress. After high school, Orlan worked for his dad on the family farm for four years. Some bad crop years and a desire to explore other things led Orlan to the decision to leave the farm and enroll in the engineering program at the University of North Dakota. He graduated with a Bachelor of Science in Mechanical Engineering. His first job post-college was for International Harvester Company in Fort Wayne, Indiana. He worked in various positions as a test engineer, project engineer, and a liaison engineer to the factories. Orlan was young and single, and far from home, but he had a friend that knew just what he needed and arranged a blind date for Orlan with a local elementary school teacher named Evelyn Thorn. The two had a whirlwind courtship and were married eight months later, on July 28, 1962. Four years later, their daughter, Kristina, was born. In 1969, Orlan accepted a job as an engineer for the Bobcat Company that brought him back to North Dakota, the state he loved so much. The family settled in Lisbon and lived there for 31 years. Two years after the move, the couple welcomed their son, Darrin, into their family. Orlan retired from Bobcat after a career of 27 ½ years. During those years, he was very active at Trinity Lutheran church and in the community. Orlan was the oldest of 8 children, and he took the role of family patriarch very seriously after the death of his father in 1984. He organized a yearly Loraas family reunion that is now on its 25th year. His siblings were a source of great joy and friendship. After retirement, Orlan and Evelyn moved to Fargo, where Orlan found retirement to be full of activity. He started his own company with his brothers, took many trips with Evelyn, and served his new church and community. He enjoyed his work with the Helping Hands at First Lutheran and at the community food shelf. He took part in a Tuesday morning bible study and became an enthusiastic NDSU Bison football fan. In retirement, he also became a grandfather to his adored Katie and Sarah, whom he would describe as the most talented, intelligent, amazing granddaughters in the whole world. Orlan is survived by his wife Evelyn, daughter Kristina (Timothy) Erickson, Granddaughters Katherine, and Sarah Erickson. Also, surviving are siblings Carolyn Holmlund, Eunice Bjornstad, Ronald (Bonnie) Loraas, Rosalie (Bill) Heirs, Edward (Sharon) Loraas, Gordon Loraas, and many nieces and nephews. Orlan was preceded in death by his parents Arthur and Myrtle, his brother Harold, and son Darrin. Memorials are preferred to First Lutheran Church of Fargo, Hospice of the Red River Valley, or a charity of your choice.

The family of Orlan Joel Loraas created this Life Tributes page to make it easy to share your memories.

Send flowers to the Loraas family.