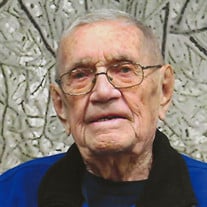 Norrie Olson died on his 102nd birthday, June 19, 2020, at the Minnesota Veterans&#8217; Home in Fergus Falls. He was born in 1918 in Moorhead, Minnesota, to Ole and Stella Olson. Norrie was baptized at First Methodist Church in Fargo when... View Obituary & Service Information

The family of Norris Arlie Olson created this Life Tributes page to make it easy to share your memories.