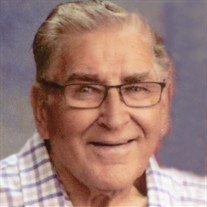 Norbert Kleingartner, 83, Fargo, passed away peacefully on Friday, November 29, 2019, in Villa Maria under the care of Hospice of the Red River Valley. Norbert was born on February 8, 1936, on the farm south of Gackle, ND, to Balzer and Olga (Schlenker) Kleingartner. He and his twin brother, Norman, were born prematurely on the farm during a snowstorm. Sadly, their mother passed away eight days later. Norbert then spent his first 12 years in Alfred, ND with his grandparents, David and Barbara Schlenker and attended school in Alfred. At the age of 12, he moved back to Gackle with his Dad and step-mother, Martha Kleingartner. Norbert served his country in the U.S. Army in 1957 and 1958. He married LuElla A. Morlock on June 21, 1959 in Gackle. They made their home in Fargo, ND. They had two children, David Mark, now deceased, and Lisa Ann Kleingartner. Norbert worked at Mid America Steel Co. (formerly Fargo Foundry) from 1959 until his retirement in 1988. After retirement, he did volunteer work at the American Legion Toy Shop and Bike Shop. He was a member of Olivet Lutheran Church, The American Legion, Eagles Club, Moose Club and the Red River Sr. Golf Tour. He is survived by his wife, LuElla, daughter, Lisa, Los Angeles, CA; his brothers, Albin and Norman (Karen), both of Gackle, ND, Melvin (Sharon), Princeton, MN, Edwin (Sharon), Bozeman, MT; sisters, Helen Kleingartner, Blaine, MN and Lillian (Dayton) Ward, New Brighton, MN; and sister-in-law, Edna Kleingartner, Jamestown, ND. Norbert was preceded in death by his son, David in 2004, his parents and step-mother, brother and sister-in-law, Rupert and Lorraine, brother and sister-in-law, Gordon and Laverna, brother, Irvin, and sister-in-law, Joyce Kleingartner. In lieu of flowers, memorials are preferred to Olivet Lutheran Church or Hospice of the Red River Valley.

Norbert Kleingartner, 83, Fargo, passed away peacefully on Friday, November 29, 2019, in Villa Maria under the care of Hospice of the Red River Valley. Norbert was born on February 8, 1936, on the farm south of Gackle, ND, to Balzer and Olga... View Obituary & Service Information

The family of Norbert Kleingartner created this Life Tributes page to make it easy to share your memories.

Send flowers to the Kleingartner family.