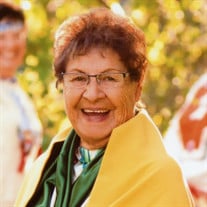 Neva's tribute video can viewed here https://www.tributeslides.com/tributes/show/33X4YYL7KTY8R546 Neva's service can be viewed here: https://vimeo.com/563701812 Neva Dancing Bull Meyers Satermo A force of nature was born on May 8, 1934...in Elbowoods, ND, and raised in Shell Village, ND. Her name was Neva Dancing Bull... and she died peacefully surrounded by her family on June 8, 2021, in Fargo. Neva was the twelfth of 13 children born to Jackson and Josephine (Birdsbill) Dancing Bull. She is the last of the Jackson Dancing Bull Family. She was a member of the Dripping Dirt Clan and a Child of the Knife Clan. Her Indian names were Giddacksha Weeish "Falcon Woman" and Odigabagee Sageedz "Good Blossom". Neva went to school at the Shell Village Day School, Flandreau Indian High School, Minot Business College and Haskell Indian College. She enjoyed growing up and attending Haskell with her niece/sister Sylvia Grey Wolfe. She married Dwight Satermo on August 26, 1955 in Stanley, ND. Five children were born to their union. They lived in Fargo while Dwight went to NDSU and Neva worked at the student union. After that, her husband's career took them to nine different states and a tour in the South Pacific. No matter where they lived, every summer she brought the children home to New Town, ND, where they spent their summers with their cousins. Neva loved to cook and host parties for her family and friends. She learned how to make the local foods everywhere they lived and also taught her new friends how to make lefse, Swedish pancakes and Indian tacos. Finally, in 1992, they retired and moved to Van Hook, ND. They were so happy to be back in their home country where they could be with their relatives. Neva was athletic and active all of her life. She enjoyed bowling competitively for almost 50 years. She bowled a 500 series when she was 83 years old. She played golf in NC and loved softball and both pitched and coached for teams for many years. Neva's life of moving every year or two never kept her from making a loving home for her family where the children's friends usually wanted to hang out. Neva was so amazing, in her 70's, she worked as a tutor for Native American youth in various schools around Fargo. Neva was widowed in 2000 and decided a year later to permanently move to the Fargo-Moorhead area and carved out a life in full for herself. She enjoyed watching her grandchildren and great-grandchildren attending their school and sporting activities and celebrations. She was also an active member of the Sons of Norway in Fargo where she volunteered as one of their favorite lefse makers. She joined the Red River Rubies Red Hats and was active with their social activities. She brought them to New Town once to be in the Little Shell Parade and showed them our powwow traditions. She dearly loved her powwows and camping every year at Little Shell. She loved traveling with Scotty and his drum groups and singing back-up. She was a member of the Little Shell Unit #300 Ladies Auxiliary. Her love for the NDSU Bison took her to many basketball and football games. She was so proud of her "Magic Bus" which she insisted on traveling to the championship games in Frisco, Texas for seven years. She loved being with her family at Lake Lizzie and Lake Crystal. Neva is survived by her children Joyce Leigh, Arvada, Colorado, Barbara Mayo (Greg), Fargo, Scott Satermo (Lisa), Fargo, and Lisa Gebeke (Brad), Fargo. She was blessed with nine grandchildren: David Leigh, Heather Schweitz, Matthew Leigh, Erin Langemo, Angela Trenbeath, Michelle Gullickson, Amanda Hurley, Jackson Satermo, Jake Hanson and 13 great-grandchildren. She was devoted to her many nieces and nephews including her beloved niece Dianne Satermo Smith (Leighton), and her nephews Darwin Williams (Valerie) and Noah Williams (KayCee). She was preceded in death by her husband, Dwight, son Bruce Satermo, her parents and twelve siblings. She will be greatly missed and as her granddaughter Erin once said, "Grams, you set the bar high for us once again!" Funeral: Triumph Lutheran Brethren, 2901 20th St South, Moorhead, MN 56560 on Saturday, June 12, 2021 at 10:30am. Internment: Riverside Cemetery, 2102 5th St South, Fargo, ND 58103 Fellowship: Delta Hotel by Marriott, 1635 42nd St SW, Fargo, ND 58103 Neva's Tribute Video can be seen and copies ordered here: https://www.tributeslides.com/tributes/show/33X4YYL7KTY8R546

The family of Neva Satermo created this Life Tributes page to make it easy to share your memories.

Send flowers to the Satermo family.