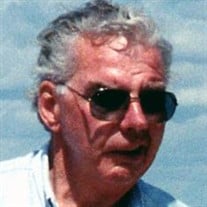 Neil R. Falck, 89, of Fargo, formerly Buchanan, ND, passed away peacefully at Villa Maria Nursing Home, Fargo, Sunday, September 8, 2019, with his family at his side. Neil was born the youngest of three sons to Thomas Bagge Falck and Margaret “Ann” Heffron Falck, June 1, 1930. Neil graduated from Buchanan High School and attended the State Normal and Industrial School at Ellendale, ND. In January 1951, Neil began service in the US Army 160th Infantry Regiment and was sent to the Korean Conflict. He spent 18 months overseas in the Heavy Mortar Company, much of it on the front lines on Heartbreak Ridge. He was honorably discharged a Corporal in December 1952. Many of the men he served with became lifelong honored friends. Neil and Pat attended many yearly reunions of these friends all over the country until 2005. Neil met his future wife, Patricia Wanzek, at a dance in Eldridge, ND, and they were married July 1, 1954. They established their farm near Buchanan with the help of Neil’s parents and some land they farmed was homesteaded land from Neil’s grandparents. Until 1962 Neil and Pat traveled to Anaheim, CA and lived near Pat’s sisters in the winter to work while farming season was idle. Neil was employed at the California Experiment Station at Pomona, and at Fleetwood Enterprises Home Division, doing the electrical wiring for manufactured homes. Neil loved farming and was capable of repairing anything as well as using his talents in carpentry, electrical, and plumbing to build their home on the farm. He was proud of his weedless fields and his proven wheat yields, but he was also innovative with his heated shop and grain storage and drying system. Neil was most proud of teaching his 2 daughters the skills to be his trusted “hired hands”. They truly ran a family farm. After retiring from farming in 1979, Neil and Pat moved to Fargo to be near their daughters. Neil enjoyed a second career delivering rural mail around Fargo, then occupied himself with building a classic car in his garage, being Mr. Fix-it for his neighbors and enjoying his granddaughters. Neil and Pat enjoyed many years of motorhome travel in their Argosy beginning in 1971. They enjoyed winters in California and Arizona near Pat’s sisters. For those who knew him best, Neil’s legacy will be that of a proud father and grandfather, his sense of humor and enjoyment of a fun time, and his generous friendship to many. Neil is survived by his daughters, Mary Anne Swiontek and husband Steve, Fargo, and Nancy, Moorhead, MN; granddaughters, Julie Swiontek and husband Jason Gronland, West Fargo; Laura Mattson and husband Reid, Fargo,as well as great-grandchildren, Amelia, Miles, and Prescott Dean Mattson. He is also survived by his brother Tom and wife Elaine, Jamestown, along with many nieces and nephews. Neil was preceded in death by his wife Pat in 2009, his parents, and his brother, Jim. His life will be honored Friday, September 20, 1:30 PM, by a Mass of Christian Burial at St. Margaret’s Catholic Church, Buchanan, ND, followed by burial at St. Margaret Mary Cemetery at Buchanan. There will be a time for visitation an hour before the service. In lieu of flowers, memorials preferred to the St. Margaret Church fund or the St Margaret Mary’s Cemetery Fund c/o 611 18th St. NW, Jamestown, ND 58401. Both of these were important parts of Neil’s heritage and he provided support and labor to ensure their care and continuation.

Neil R. Falck, 89, of Fargo, formerly Buchanan, ND, passed away peacefully at Villa Maria Nursing Home, Fargo, Sunday, September 8, 2019, with his family at his side. Neil was born the youngest of three sons to Thomas Bagge Falck and Margaret... View Obituary & Service Information

The family of Neil Richard Falck created this Life Tributes page to make it easy to share your memories.

Send flowers to the Falck family.