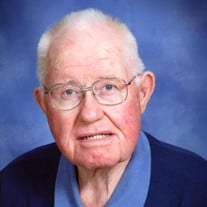 Myron's service will be streamed here: https://vimeo.com/632277870 Myron's tribute video can be viewed here. https://www.tributeslides.com/tributes/show/MQGHCP5JYD56J6HB Myron Curtis Thoreson, 86, of Fargo, ND passed away Saturday, October 9, 2021, at the Veterans Administration Health Care Facility in Fargo. Myron was born on the family farm near Bentley, ND on April 7, 1935 to C. O. and Madeline (Marking) Thoreson. He had one older brother - Benton - and one younger sister - Sceone. Myron attended rural schools in Hettinger County, and graduated from the South Dakota School of Agriculture (located at South Dakota State University) in Brookings, SD. In 1958, he was drafted into the United States Army. Myron served his country proudly through 1962, and reached the rank of E5 (Sergeant) before being honorably discharged. He then returned to the family farm. In August 1962, Myron met his future wife - Juliet Overmoen. They were married May 25, 1963, at Our Savior's Lutheran Church in Hillsboro, ND - and were married for 58 years. Myron and Juliet welcomed three children to their family: Blair, Heather, and Trevor. Myron attended Hanson Mechanical Trade School in Fargo. He graduated from the school and then joined the faculty as an instructor. In 1967, Myron accepted a position in the Horticulture department at North Dakota State University, where he remained until his retirement in 1998. Not ever being someone to "retire", he almost immediately returned to NDSU on a "temporary" basis until 2012 - a total of 45 years at the university! Along with his full-time employment, Myron ran an automotive repair business from his home garage for many years. Besides a place to get a vehicle fixed, Myron's garage was a popular gathering place for neighborhood friends. He loved farming. Honoring his agricultural heritage and career, Myron was an avid collector of toy tractors. He could fix, build, or repair almost anything. Myron used those God-given talents to help others throughout his life. He was also a world-class lefse maker. In his later years, he enjoyed attending many activities involving his four grandchildren. He was a member of First Lutheran Church in Fargo, where he served as an usher for many years. Myron was a member of Sons of Norway, and the American Legion. Myron was preceded in death by his parents, C. O. and Madeline, his brother, Benton, and brother-in-law, Tim Sorneson. He is survived by his wife, Juliet; son Blair (Jennifer) Thoreson and their sons, Christian and Benjamin of Fargo, ND; daughter Heather (Wade) Benson and their daughters, Annika and Emily of Blaine, MN; and son Trevor of Fargo; his sister, Sceone Sorneson of Boise, ID; sisters-in-law Sonia (Milton) Gullicks of Sharon, ND and Betty Thoreson of Rapid City, SD and their families. In lieu of flowers, memorials are preferred to First Lutheran Church, Fargo, ND.

The family of Myron Curtis Thoreson created this Life Tributes page to make it easy to share your memories.

Send flowers to the Thoreson family.