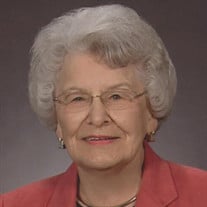 The Funeral Service for Muriel will be streamed at the following link at 1pm on Tuesday, June 9, 2020 and will be available after to view: https://vimeo.com/427138192 Muriel Priscilla Strand Anderson died on June 4, 2020, at Sanford Hospice House in Fargo, North Dakota. She was 98 years old. Muriel was born at home near Sheldon, ND, on August 6, 1921 to Peter and Minnie (Johnson) Strand. She grew up on the family farm with her brothers and sister, parents, and grandfather, in a life full of laughter and teasing, hard work and love and respect for others. After her education in a one-room schoolhouse in Coburn Township, she moved into town and graduated from Sheldon High School. She used the proceeds from the sale of a cow and, later, a flock of turkeys, to attend Valley City State College where she earned her Associate Degree in Education. She began her teaching career in Leonard, ND followed by Enderlin, ND. She earned her B.S. degree in Education from Moorhead State Teachers College (now MSUM) in 1966. While teaching in Enderlin, she met her brother Wayne’s good buddy, Eugene (Gene) R. Anderson. They were married on September 13, 1947. After several early moves, they settled in Fargo in 1952 where Gene began working for Dakota Plate Glass Company. At the end of her life, she lived with her son Bruce and daughter-in-law Janice until she moved to Sanford Hospice House. Muriel began teaching in the Fargo Public Schools in 1952, first as a substitute teacher at Jefferson Elementary. She was later hired full-time and was the first married woman with a child to be given a regular contract by the Fargo Public Schools. It was the beginning of a long career in teaching young children in Fargo. She taught at Jefferson Elementary, Clara Barton Elementary, and Washington Elementary, and helped to begin an experimental pre-school program for Fargo Public School. She believed that any child could learn, and that the perceived failure of a child was actually the failure of teaching. She was always willing to take a leadership role in her career, participating and leading many committees and special programs, and having at least one student teacher every year. She was also a founding member of Alpha Delta Kappa, an honorary education sorority, and very active in Fargo Retired Teachers’ Association. Muriel and her family joined Olivet Lutheran Church in 1952. She served in many capacities including Olivet’s Church Council where she became the first woman to be elected president of the Council. She was also active as a Sunday School teacher, confirmation leader, Stephen’s Minister, and had a special love for the Quilters and Miriam Circle. Upon retirement, she became a member of AE Chapter of PEO and enjoyed participation in the Sons of Norway with her husband Gene. They were enthusiastic members of the Thursday team for many years. Muriel was a woman of deep faith. She was a leader in many ways, independent by nature, full of fun and teasing, and a natural athlete with a strong competitive spirit. True to her Norwegian ancestry, she exhibited stoic strength in the toughest situations. She was always dressed beautifully and put together, a true lady’s lady. Like so many of the greatest generation, she rose to the occasion when called upon. She will be greatly missed. Muriel was loved by many, but especially by her son Bruce and his family. She is survived by her son Bruce and daughter-in law, Janice, in Fargo; granddaughter Amy Lee Anderson and her husband Eric Bailly, and their daughters Jensina and Amelia, all Moorhead, MN; granddaughter Liza M. Anderson Schmid and her husband Pastor Mark Schmid, and their children Trygve, Josephine, and Marit, all Minneapolis, her sister-in-law, Dolly Strand, dear friend of more than 60 years, Helen Anderson and her family, and many cousins, nieces and nephews. She knew them all by name and remembered them fondly. In addition to her parents and husband, Muriel was predeceased by her brothers Maynerd, Wayne, Orville, and Milton Strand and her sister Lorine Bjugstad. The Celebration of Life will be at Hanson-Runsvold Funeral Home, Fargo, on Tuesday, June 9, 2020, at 1:00 PM. Visitation will be one hour prior to the service. Burial will immediately follow at Sunset Memorial Gardens in Fargo. Pastor Bill Boelter will officiate. The service will be livestreamed from the Hanson-Runsvold website. Memorials may be sent to Olivet Lutheran Church or the organization of your choice. Muriel's Video Tribute: https://www.tributeslides.com/tributes/show/XQBN6H9MTYL6JPKH

The Funeral Service for Muriel will be streamed at the following link at 1pm on Tuesday, June 9, 2020 and will be available after to view: https://vimeo.com/427138192 Muriel Priscilla Strand Anderson died on June 4, 2020, at Sanford Hospice... View Obituary & Service Information

The family of Muriel Priscilla Anderson created this Life Tributes page to make it easy to share your memories.

The Funeral Service for Muriel will be streamed at the following...