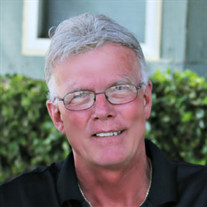 Mitchell Bernard Rapp, 70, passed away on Thursday, September 5, 2019 surrounded by his family at the Fargo VA Hospital. Mitch was born on August 4, 1949 at St. John’s Hospital in Fargo, North Dakota. Mitch was drafted into the United States Army in 1969 and served in the Vietnam war for just under four years. He was a hard worker throughout his life, starting his career at a local Piggly Wiggly grocery store at the age of 16. His career flourished, which inspired him to own his own store in Enderlin, ND, called “Rapp’s Jack & Jill, Home of Rock-n-Roll Groceries.” Some of his greatest accomplishments outside of his five daughters were being the mayor of Enderlin, ND, fire chief, and founder of Papa Rapp’s Race Car museum. He married his wife, Cynthia Rapp (Wurzer), in 1988. Mitch had a passion for drag racing throughout his life and following his retirement from Nash Finch in 2013 he continued his love of cars by purchasing a 1968 Chevy Nova he named “Novacane.” He will be remembered by his culinary skills, handy work, and green thumb abilities. He was a sports enthusiast, lover of rock and roll, and enjoyed collecting cookie jars and restaurant menus from all over the world. For those who knew him best, his legacy will be known as a fun boss, proud father and grandfather, loving brother, and dependable husband. He is preceded in death by his father Leland John Rapp, mother Bernice Elizabeth Noll (Korte), sister Geri Lynn Mortenson, and grandson Jonah Raider Lehfeldt. Mitch is survived by his wife Cynthia of Fargo, ND; sister Kiara (Kevin) Schroeder of Moorhead, MN; daughters Autumn (Steve) Hareland of Horace, ND, Michelle (Jamie) Wadeson of Argusville, ND, Kelley (Trevor) Lehfeldt of Brandon, SD, Erica Rapp of Fargo, ND, Andrea Rapp of Apple Valley, MN; 12 grandchildren, and numerous nieces and nephews.

Mitchell Bernard Rapp, 70, passed away on Thursday, September 5, 2019 surrounded by his family at the Fargo VA Hospital. Mitch was born on August 4, 1949 at St. John&#8217;s Hospital in Fargo, North Dakota. Mitch was drafted into the United... View Obituary & Service Information

The family of Mitchell Bernard Rapp created this Life Tributes page to make it easy to share your memories.

Send flowers to the Rapp family.