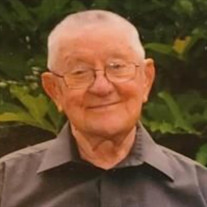 Milton M. Paulson, 98, of Fargo, ND died peacefully on July 21, 2020 surrounded by his family. Milton was born on March 12, 1922 to Lars and Minnie Paulson in Lisbon, ND. He grew up on a farm near Lisbon, graduated from Lisbon High School then worked on the family farm until 1952. He received his fingerprinting certificate but chose to continue farming. He attended NDSU to become a welder. He worked at the Fargo Foundry until he retired in 1983. He met Hannah Prince on a blind date and was eager to make her his bride, but she made him wait until April 1957. They joined Olivet Lutheran Church in 1958. When Milton retired, he would question Hannah as to where she was going all the time. He learned she volunteered everywhere. He soon joined her in delivering Meals on Wheels, which they did for 27 years! He served as an usher at his church and on the funeral team. Milton always had a love for music. He started playing a mouth organ, as he called it, when he was 5 years old. He played his harmonica until the end. He’s probably putting on a show in heaven as you read this! He also was a self-taught guitarist and played in a band with his brother, Larry. While Hannah was busy volunteering, Milton would be at local car and truck dealerships schmoozing and eating free hotdogs. He also acquired a hobby of picking up aluminum cans that were littering the ditches. He got the exercise he needed and turned in the cans for cash! He and Hannah went on a number of senior bus trips. He was able to share his jokes as they traveled. He was known for his jokes, kindness, generosity, and sense of humor! While his spirit remains with us, he will be greatly missed. Milton is survived by two daughters, Sandy (John) Tellinghusen, MN and Susan Paulson (Eric Christensen), CA: five grandchildren, Mikaela (Michael) Cather, Dan Tellinghusen, MN, Thomas Paulson, Zachary Paulson, ND, Leigha Paulson (Matthew Bailey), WA, Brothers, Jesse (Marion) Paulson, Larry (Jan) Paulson and many nieces and nephews, family and friends who he held dear in his heart. Thank you to, Kathy Strumstad, for providing exceptional care to our Dad. Thank you to our incredible neighbors, Marlene Austinson, Roger and Ellice Landy, Steve and Jill Mozack, Rich and Emily Daniels, Mary and Pete Adam for your friendship and love during this whole journey. Thank you to Selina Jackson for your friendship and support. Thank you to Eric Christensen for your unwavering love and support. Thank you to Mikaela and Mike Cather along with Dan Tellinghusen for caring for Grandpa on many occasions. Thank you to Tom, Zach, Leigha and Matthew for writing letters and FaceTiming with Grandpa, which he found amazing. Thank you to Sandy Tellinghusen for the daily care of our Dad for 23 months. She was able to see the humor in some pretty crazy situations. Thank you to Susan Paulson for all the times she came to care for Dad so Sandy could get some much-needed rest, especially when Sandy and John got to go to Arizona. Dad was so impressed with her care he said, “Susan, when you retire, you can get a job as a nurse’s assistant.” Susan said, “When I retire, I’m going to retire!” A huge thank you to John Tellinghusen who graciously shared his man cave with Dad and dealt with all the “old guy noises” that Dad made. We know it hasn’t been easy some days and we appreciate your sacrifice. He was preceded in death by his wife, Hannah Paulson, his parents, Lars and Minnie Paulson, brother, Clarence Paulson, sisters, Neva Olson and Bernadine Sire. In lieu of flowers, memorials preferred to Olivet Lutheran Church, Music Department or Donor’s choose https://www.donorschoose.org/project/math-music-social-and-emotional-learni/5034327/ Milton's tribute video can be seen at: https://www.tributeslides.com/tributes/show/3ZKBTZ57TL46YYCY

Milton M. Paulson, 98, of Fargo, ND died peacefully on July 21, 2020 surrounded by his family. Milton was born on March 12, 1922 to Lars and Minnie Paulson in Lisbon, ND. He grew up on a farm near Lisbon, graduated from Lisbon High School... View Obituary & Service Information

The family of Milton Maynard Paulson created this Life Tributes page to make it easy to share your memories.

Send flowers to the Paulson family.