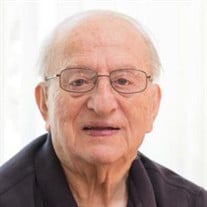 Millard's service will be streamed here: https://vimeo.com/449297075 Millard M. Schatz, 92 of Fargo, North Dakota, died, Saturday, August 15, 2020, at Eventide Senior Living Community on 32nd Avenue South in Fargo. By his side was his wife of 29 years Donna and the staff members from Eventide and Hospice of the Red River Valley. A celebration of life service will be held for family members at 10:00 AM, Friday, August 21, 2020, at Hanson - Runsvold Funeral Home, 215 7th Street South in Fargo, North Dakota 58103. Visitation for family members will begin at 9:00 AM with the burial following the celebration of life service at Riverside Cemetery in South Fargo. Millard was born May 18, 1928, in Washburn, North Dakota, to Jacob and Wilhelmina (Minnie) Schatz. He grew up in Bismarck, North Dakota, and graduated from Bismarck Public High School. After high school, he served in the Army Reserve for three years as a supply clerk. The JCPenney company employed Millard for the rest of his career. In total, he spent 50 years with the JCPenney’s company. Millard started in the stock room and later worked in the men's work clothes department, and shoe department. At the pinnacle of his career, he became a regional buyer of men's clothing from Chicago to Omaha and starting in 1962 the manager of the Men's Clothing department in Fargo. As known in the Men's Clothing Department and throughout the upper Midwest as Mill's, many of his repeat clients referred to him as "one of the greatest men's clothiers" during the peak of the men's suit era. Millard is survived by wife Donna, sons Duane (Trish), Salem, Oregon, Doug, Greg (Linda), and Jeff (Gretchen), Fargo, North Dakota, stepson Craig (Brenda) Casler, Dilworth, Minnesota, and daughter, Karen in Moorhead, Minnesota. He was preceded in death by son Dennis, daughter Debbie, and stepdaughter Jill Rudolph. A special thank you is extended to the caring staff at Eventide Senior Living Center who, over the past two years, provided comfort and care to Millard. Also, thank you to Hospice of the Red River Valley for being there and guiding his last hours on earth.

The family of Millard M. Schatz created this Life Tributes page to make it easy to share your memories.

Send flowers to the Schatz family.