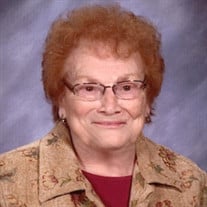 Mildred Eunice (Dwight) Schimmelpfennig was born on August 26, 1926, in Burlington, North Dakota, to her parents Preston and Ethel (Berrong) Dwight. They lived in Velva and Burlington, ND as she grew up. Mildred died at the age of 93 on March 17, 2020, in Fargo, ND at Villa Maria Nursing Home. Mildred married Herbert R. Schimmelpfennig on August 3, 1947. They had four children, Herb, Jerry, Sue, and Kathy. Mildred was an elementary teacher in Bismarck for over 30 years, substituting and full time, primarily at Riverside School. Her former students remember her as one of their favorite teachers and learned how to spell Schimmelpfennig to pass her class but also loved her magic carpet and how delightfully she told her stories. Mildred was a gem. She accepted people into her circle naturally with her personality and welcoming nature. Herb died in 1994. A few years later, Mildred moved from Bismarck to Fargo to live next door to Jerry and Diana. She lived there until 2008, when she moved to live with Jerry and Shirley in her grandma’s suite in their house. Living there she had the support of her family and also her own private space. After a few years and health issues, when a higher level of care was needed, she moved to the Villa Maria care facility. Mildred loved the care and attention she received and always referred to her new home as “the Villa.” The family appreciates the love and care she received from the Villa staff and we know she loved them. She always introduced us to the staff as a way to demonstrate to us how important they were to her. Mildred loved a good cup of coffee and had a big sweet tooth. She lived by the motto: “Eat dessert first.” She received her angel wings on March 17, 2020, but those who knew her would call her an angel on earth. Her surviving family members include her son, Jerry (Shirley), daughter Sue, and daughter Kathy (John). Her son Herb passed away in 2009. Mildred is also survived by her brother Floyd (Pat) of Ventura, CA and grandchildren, David (Callie), Katie (Michael), Michelle (Kate), Sam (Kris), Anna, Charles (Ethan), Allison (Matthew) and Ryan (April), Emily (Reed), Ted, Hannah, Jack and Ben. Great grandchildren are Ian, Keaton, Jonah, Payton, Jordan, and Everly. She also had many nieces and nephews. Due to the pandemic the family held a private prayer service and a limited viewing. A memorial service will be scheduled for a date later this summer. Mildred would appreciate any memorials made to Villa Maria, Lutheran Social Services of North Dakota, or Hospice of the Red River Valley.

Mildred Eunice (Dwight) Schimmelpfennig was born on August 26, 1926, in Burlington, North Dakota, to her parents Preston and Ethel (Berrong) Dwight. They lived in Velva and Burlington, ND as she grew up. Mildred died at the age of 93 on March... View Obituary & Service Information

The family of Mildred Eunice Schimmelpfennig created this Life Tributes page to make it easy to share your memories.

Send flowers to the Schimmelpfennig family.