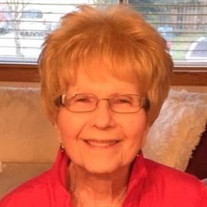 MICKI NOHR (PETERSON, VON RUEDEN) Prayer Service Video: https://vimeo.com/429096376 Funeral Service Video: https://vimeo.com/429282474 On June 12, 2020, Micki saw the face of Jesus while being held in the arms of her daughters, Michelle and Deb. After years of suffering with chronic pain, her prayer to be taken home with the Lord was answered. Micki was born on March 24, 1935, to Ervin and Katherine (Neva) Willmert on the Neva farmstead near Buchanan, ND. She was always so proud that her precious Grandma Neva had delivered her. Micki spent much of her preschool years with Grandma and her maternal uncles on that farm. Growing up, she lived in Stanley and Berthold, ND, eventually moving to Wahpeton as a high school sophomore, where she graduated in 1953. She then trained as a lab and x-ray technician at St. Francis Hospital in Breckenridge, MN. Micki loved to dance. Growing up, she and her older sister Phyllis would dance to the tunes on the radio while they waited for the dishwater to heat up on the stove. When Micki and her first husband, Tony Von Rueden, dated, they often stole the dance floor doing the jitterbug. Micki married Tony on December 27, 1956 in Wahpeton, ND. They had five children: Michelle, Lori Kay, Jerry, Theresa, and Debbie. They later divorced and in 1970, Micki married Howard Peterson. They were married for 28 years. In 2011, Micki was reunited with an old high school boyfriend, Ellwyn Nohr. They married in 2012, but have recently separated. Throughout her life, Micki worked at clinics in Wahpeton, Breckenridge, West Fargo, and Fargo. She truly loved going to work everyday. Her morning prayer was always, “Lord, show me the person you want me to speak to through my life today.” At times, it would be so evident that she would say, “Alright, Lord, Alright.” She also reached out to total strangers that were going through difficult times, by sending them encouraging notes and letting them know that she was praying for them. At the bottom of each envelope, she would write, “Faith in God is my Anchor!” Many of these people had lost children and Micki wanted to comfort them, having lost her infant daughter, Lori Kay, and her son Jerry at age 18. She became affectionately known as the “Prayer Warrior.” With her death, she left a handwritten note: “You will all have to be Prayer Warriors for each other now. It is a wonderful vocation.” There were three young men that found their way into Micki’s heart after the death of her son: Jeff Anderson, Longmont, CO; Jim Endres, Phoenix, AZ; and David Peterson, Fargo. To Jeff and Jim, and all her children and grandchildren’s friends, she was known as “Mama Micki.” Everyday, Micki read this quote from Stephen Grellet: “I shall pass through this world but once. Any good, therefore, that I can do or any kindness I can show to any human being, let me do it now. Let me not defer or neglect it, for I shall not pass this way again.” She let everyone know, that “without God, I could never have made it through my life.” Micki’s celebration of life will be held at Hanson-Runsvold Funeral Home, Fargo, on Monday, June 15, 2020, at 1:30 pm. Visitation will be one hour prior to the service. There will also be a visitation from 5-7 pm on Sunday, June 14th, followed by a prayer service and time of sharing at 7 pm. Micki asked that no flowers be sent, instead she asks that you send a bouquet to someone you love. She always felt that flowers were for the living. She requested that people wear bright colors to her funeral… to remember her with joy and laughter. She wants everyone to get up and share a favorite story about her. Micki is survived by: her daughters, Dr. Michelle Von Rueden and Debra (Craig) Penley, both of Fargo, and her son-in-law, Kirt Helm, of Fargo; grandson Hunter Konze; granddaughter Brittni Tritchler (and her sons, Jaxon and Joah); her great-grandson Cameron Tritchler, and five sisters: Beverly, Barbara, and Beatrice Benda; Karen Werner, and Dodie Baumer. Micki was preceded in death by her children: Lori Kay, Jerry, and Theresa; grandson Josh Tritchler, and her sisters Sylvia and Phyllis.

The family of Micki Geneva Nohr created this Life Tributes page to make it easy to share your memories.

Send flowers to the Nohr family.