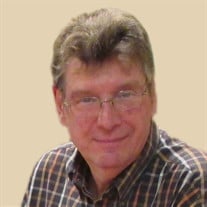 Mike's service will be livestreamed here: https://vimeo.com/637936897 Michael “Mike” David Hanson, passed away surrounded by loved ones at Vibra Hospital on October 20, 2021. He fought a long and courageous battle with COVID-19. Mike was born in Fargo, ND, to Howard and Betty (Anderson) on October 4th, 1956, joining his four older brothers. He graduated from Fargo North High School in 1975. After attending NDSU for a short period of time, Mike decided that his true passion was in sales. He spent many years as a top salesman at Northern School Supply and sold furniture before he retired. Mike married Tracey (Hunt) in 1978. Together, they had three children: Suzanne, Michael, and Elizabeth. Being a dad was Mike’s greatest pride. He was also a trusted caregiver to several of his close relatives when they faced health challenges. Mike had many talents, including an impeccable memory for faces and events. He had an uncanny ability to find humor in everyday life. Those who met Mike knew that he was always willing to lend a helping hand and meet challenges with warmth and humor. Mike enjoyed spending time with his family, going to his family lake place on Lake Lida or his cousin’s resort in Northern Minnesota, watching NDSU Bison & Minnesota Vikings football, and listening to music. His quirky humor and wit shone through in other areas, such as his column in the El Zagal Shrine’s “Camel Tales”, where he rode motorcycles and served terms as vice-president and president for the ‘57 Directors Staff. His most recent interests included texting random emojis to all of his contacts, talking on the phone with friends, and watching his favorite shows, including, but not limited to, Wheel of Fortune, Deadliest Catch, and Below Deck. Mike is survived by his three children, Suzanne (Robert), Michael (Ashley), and Elizabeth (Kenneth); his brother, Steven (Eldean), a niece and nephew, Andrew and Amy, and many, many cousins. He was preceded in death by his parents, Howard and Betty; and brothers, Dennis, Gregory, and Douglas. Please share your favorite memories (we all have one) or photos of Mike on Hanson-Runsvold’s Online Guestbook, or on Facebook.

The family of Michael David Hanson created this Life Tributes page to make it easy to share your memories.