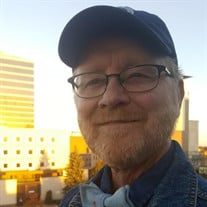 Michael M. Casler, 63, passed away on November 15, 2020, after a 10-year long battle with cancer, his loving family by his side. Mike was born on March 28, 1957, to Maurice and Dorothy (Magnuson) Casler in Fargo, ND. He was educated in the Fargo Public School system, and at 14, he was honored to be a United States Page, and attended US Senate Page school for that year, and graduated from Fargo North High School in 1975. Mike joined the US Navy in 1975, returned to Fargo in 1981, and attended NDSU where he studied Anthropology & U.S. History. He was also a member of the MN National Guard. On August 25, 1984, Mike married the love of his life for over 36 years, LuAnn Casler in Fargo, ND. He was father to three children, Mark, Katy & Thomas. In 1988, Mike accepted a position with The National Park Service at Fort Union Trading Post in Williston, ND. During his 19 years at the fort, he was a resource for tourists from all over the world, educating them on the Fur Trade. He participated in Fur Trade Rendezvous at Fort Union and across the country since 1989 and was a member of The American Mountain Men. He was a man who wore many hats, literally and figuratively. He fought the wildfires in Montana in 2000 and he was an EMT on the National Mall in Washington D.C. for the July 4, 2002 celebration. He was a Co-Chair for the Lewis and Clark Expedition at the Confluence Celebration. He developed the Trails and Rails program on the Empire Builder, putting volunteers on the train from Williston to Shelby, MT. He was an accomplished speaker, and author of many articles on the Upper Missouri fur trade, and writer of multiple books; Steamboats of the Fort Union Fur Trade, Forts Tecumseh and Fort Pierre Chouteau: Journal and Letter Books, 1830–1850, Fort Union and Fort William: Letter Book and Journal, 1833-1835, and The Original Journals of Charles Larpenteur. He was an involved member of his community. Mike was with the Trenton First Responders for over 20 years, and he also worked with the Williston Ambulance. He was Post Commander of the Edgar M. Boyd Post #37 in Williston. He was on Buford Township, and on the board of Williston Rural Fire Department. He was an avid member of the Democratic party in Western ND. He was an expert napper, stray cat lover, D&D player, collector of many books & collectable toys, the best Papa to his grandchildren, and the most embarrassing and loving Dad to his kids. His Facebook posts always made his opinions known, on politics, TV shows, his love of black coffee, or where he happened to be eating a meal at that day. He was an expert Facebook tagger of which you could never escape if you happened to enjoy a meal with him outside of the house. Mike is survived by his wife, LuAnn, son, Mark Casler, Williston, ND, daughter, Katy (Tyler) Spiekermeier, Fargo, son, Thomas (Ciara) Casler, Fargo; grandchildren, Cameron (5), & Quinn (2) Casler, Fargo. Sisters, Julie (Mark) Cocca, Pheonix, AZ, Cindy Casler (AZ) & Susan Slattery (FL). Along with numerous cousins, family members and dear friends. Mike is preceded in death by his parents, grandparents, aunts, uncles and cousins.

Michael M. Casler, 63, passed away on November 15, 2020, after a 10-year long battle with cancer, his loving family by his side. Mike was born on March 28, 1957, to Maurice and Dorothy (Magnuson) Casler in Fargo, ND. He was educated in the... View Obituary & Service Information

The family of Michael Maurice Casler created this Life Tributes page to make it easy to share your memories.

Send flowers to the Casler family.