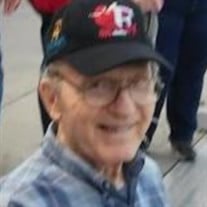 Merle's funeral service will be streamed here: https://vimeo.com/448923404 Merle Albert Newton was born August 19, 1936, in Enderlin, North Dakota, to Albert and Helen (Leach) Newton. He died on Wednesday, August 12, 2020, at Sanford Health Hospital in Fargo, North Dakota. Merle grew up in the Lisbon, Sheldon area in North Dakota in his early years, and later graduated from high school in 1954 in Stirum, North Dakota. He then attended Valley State City Teachers College for his office training and then following that he completed his accounting schooling at Interstate Business College in Fargo, North Dakota. He then entered the military – Army Branch for basic training. Upon his return, he started working for Super Valu Inc in Fargo, North Dakota, in 1961. He then met and married Carole Helen Jackson on July 30, 1966; they had three children, Barbara, Mark, and Dale. He later retired from Super Valu Inc in 2002. After retiring, he did work as a horseman bookkeeper for the Fargo Horse Park from 2005 to 2013. He was very active in the church choir at Faith Methodist Church in North Fargo, North Dakota, up until about a year ago. Merle had a dry sense of humor, was a very methodical thinker, loved singing in the choir at church, loved the Lord, loved classical music, enjoyed gardening, and he loved baseball (Minnesota Twins). He was a good family man, provided for his family, and was able to really enjoy his retirement, spending time with his family. He is survived by his brother Harry Newton Bella Vista, Arkansas, his wife, Carole Newton, daughter Barbara (Jerry) Wild, son, Mark (Tammy) Newton, grandsons, Tyler, and Matthew Newton all of Fargo, North Dakota, son, Dale (Jennifer) Newton of West Fargo, North Dakota. He was preceded in death by his parents, brothers Melvin Newton, Bill Newton, and Stanley Tyler.

The family of Merle Albert Newton created this Life Tributes page to make it easy to share your memories.

Send flowers to the Newton family.