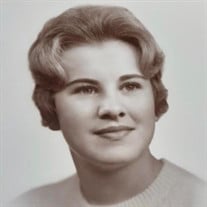 Meredith Golde (Bjornson), 77, of Fargo, ND, passed away on Thursday, September 17, 2020 at Essentia Health in Fargo. Meredith Margaretta Bjornson was born to Dr. Christian and Alice Petra Husfloen Bjornson on March 1, 1943 at St. Luke's Hospital in Fargo ND. The family later moved to Bismarck, ND, then to Grand Island, NE, returning to Fargo, ND in 1958, all in pursuit of her father's career as a Veterinarian. Meredith graduated from Fargo Central High School in 1961. She attended North Dakota State University and studied Home Economics. She married Allen Gene Vevang in 1962, and they relocated to Los Gatos, California. They later divorced. In 1967, she married Edward Maurice Golde at Temple Sinai in Oakland, California. They welcomed their daughter Allison Rachel in 1970 at Alta Bates Hospital in Berkeley, CA. During her years as a career woman she was an office manager and then a pharmaceutical sales representative for Pennwalt Pharmaceuticals. In 1983, she was honored with an Outstanding Pharmaceutical Saleswoman award. Meredith was regularly active in her daughter’s life, judging figure skating competitions, a board member, and an announcer at some of the local competitions. Meredith was also an assistant soccer coach to Allison’s first girls’ soccer team in Montclair, CA. Meredith was proud of the fact that she started the first La Leche League in Montclair, CA when Allison was born, supporting breast feeding mamas. Meredith played an active role as a member of the Oakland Symphony Guild. Meredith was a lifelong learner of all things, especially medical and science related. She was passionate about people and socializing. Her favorite times were spending time with her daughter during her years as a competitive figure skater and later escorting her daughter on auditions and movie sets. Her sense of humor and bubbly personality was infectious, making friends wherever she went. She was fond of dishing out witticisms and unique observations and was always quick with an answer. She was most proud of her only granddaughter, Emma. She would share with her friends and family Emma’s softball stories and was most proud that Emma was a catcher on a travel softball team in San Ramon, California. Meredith was also proud of her son-in-law Justin, as he works in Biotechnology in the San Francisco Bay Area. Meredith suffered a cerebral hemorrhage on September 17, 2020 at Essentia Hospital in Fargo, ND, she was 77 years young. Meredith’s beautiful eyes were donated to the University of Minnesota and the Minnesota Lions Eye Bank (now Lions Gift of Sight). Both recognized that they held the common interest of serving the people of Minnesota, and one way to act on this service was to give the state an eye bank. The entire eye can be used for research and education. She was preceded in death by her parents, her beloved aunt Margaretta Bjornson Rodriguez, and Edward Maurice Golde. She will be greatly missed by her family, friends, and her cat Missy. Meredith is survived by her daughter Allison Golde, son-in-law Justin Golde, and grand-daughter Emma Amalia Golde. Additional surviving family members include Dr. George M. Johnson and his lovely wife Janice Johnson, judicial referee (retired). The family has entrusted Hanson-Runsvold Funeral Home with the arrangements.

The family of Meredith Margaretta Golde created this Life Tributes page to make it easy to share your memories.

Send flowers to the Golde family.