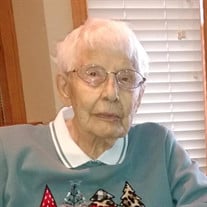 Mayvis’ service can be viewed here: https://youtu.be/B056hWjjbAA View Mayvis' Tribute Video Here: https://www.tributeslides.com/tributes/show/SN3KLBT2XRCL5TJW Mayvis Solberg, 106, of Fargo, ND, passed away on Wednesday, January 12, 2022 at Pioneer House in Fargo. Mayvis Costain was born March 8, 1915 at DeLamere, ND to Bert and Kate (Rundell) Costain where she grew up and attended school. She graduated from Bethesda Hospital School of Nursing, St Paul, MN; through the Cadet Nursing Program, in April 1947. On September 28, 1947 she married Clarence Solberg at Milnor, ND. They moved to Portland, Oregon where she worked at Emmanuel Hospital. They purchased Clarence's home place and moved back to Wild Rice, North Dakota in 1951. She worked at St Luke's Hospital, Dakota Hospital then Eventide Nursing home in Moorhead, MN. She retired from nursing in January of 1978. Clarence and Mayvis were charter members of Atonement Lutheran Church, where she enjoyed quilting for 49 years. While a member of Hickson and Horace Senior Citizens she planned and led numerous bus trips in the surrounding area. After retirement she also enjoyed a cruise to the Bahamas and a trip to Alaska. She is survived by three children Susan (Stephen) Loe, Maxine (Mike) Romsdahl, Warren (Mara) Solberg, 7 grandchildren, eleven great-grandchildren and one great-great grandchild. Surviving also is a sister Eleanor Thompson of Oregon. She is preceded in death by her husband Clarence in 1993, brothers Merrill, Wayne, Harley, Floyd and sisters Estelle, Muriel, along with a great granddaughter Chelsey Davis.

The family of Mayvis Marie Solberg created this Life Tributes page to make it easy to share your memories.

Send flowers to the Solberg family.