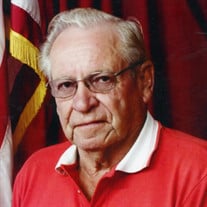 Marvin's tribute video can be viewed here https://www.tributeslides.com/tributes/show/Z6DCXKHQ6LG885ZX Marvin Raymond Kaseman, son of Edward and Christina (Schilling) Kaseman was born July 1, 1933 on the farm in rural Wishek, ND. He died on June 11, 2021 in Fargo, ND, surrounded by family. After graduating from Wishek High School, he entered the US Army, serving from June 12, 1953 to May 23, 1956. On July 4th, 1954, he married the love of his life, Shirley Emma Bettenhausen. After being Honorably Discharged from the US Army, Mavin attended and graduated from the North Dakota State School of Science, Wahpeton, ND with a two year Trade School degree as an Electrician, his life long profession. He eventually became the co-owner and Manager of Modern Electric in Fargo, ND. He attained and maintained Master Electrician rating for many years. Shirley was his beloved wife of 65 years. They were inseparable; best friends and constant companions. They complemented each other perfectly. Marvin was reserved, stern and serious; Shirley cheerful and outgoing and a friend to everyone. They had many adventures together, criss-crossing the country in their RV, even driving in a camper to Fort Wainright, near Fairbanks Alaska, where Marvin was stationed right after they were married. After retirement, Marvin built a beautiful cabin on Beaver Bay, near Linton, ND. It was surrounded by a large garden and colorful flowers. Marv and Shirley eventually became Texas snowbirds, enjoying summers in their cabin on Beaver Bay and winters in their park model home near Harlingen, TX. Marvin was a member of the American Legion and Elks for many decades. He was also a Shriner. As a life long Lutheran, Marvin attended Hope Lutheran Church, Fargo, ND. Marvin is survived by a son and daughter, Jason (Sharon) Kaseman and Tamara (Tim) Watson, along with three grandchildren: Matthew Kaseman, Sarah Kaseman (Justin), and John Watson. He has four surviving siblings: Adam Kaseman, Erna Tallman, Clifton (LaVerna) Kaseman, and Edward Kaseman. Marvin was preceded in death by his beloved wife, Shirley, daughter Deborah Kaseman, his parents Edward and Cristina Kaseman, his sister Leona Kaseman and brothers Art and Howard Kaseman. Funeral Service: 11am, Tuesday, June 15, 2021 at Hanson-Runsvold Funeral Home - Fargo, ND. Visitation: One hour prior to the service. Burial: Riverside Cemetery, Fargo, ND

The family of Marvin Raymond Kaseman created this Life Tributes page to make it easy to share your memories.

Send flowers to the Kaseman family.