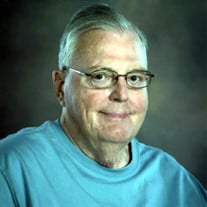 Marvin's tribute video can be viewed here. https://www.tributeslides.com/tributes/show/8629DTSJ3JMPWDZ4 Marvin Carter Gutknecht of Casselton, ND passed away at Meadows Nursing Home in Fargo. He had been a resident there for eleven years after suffering a massive stroke in 2011. Recently he contracted pneumonia. Marvin was born July 2, 1942, in Glenfield, ND to Opal and George Gutknecht. Opal died when Marvin was a toddler. George married Thelma Mitchell and she was Marvin's mother until she died. He went to school in Jamestown and graduated from Enderlin High School in 1960. He enlisted in the US Navy and was stationed in Miramar, California, serving on the USS Bonhomme Richard carrier until 1964 when he was honorably discharged. He was in the Fighter Squadron 191 and achieved the rank of AMH2. Following his military service, he lived in Fargo and worked for Purolator Courier Service. He met Gayle Marie Axen, a nurse, and they married June 11, 1966, in Fargo. He enrolled in North Dakota State University and obtained a BS degree in Agricultural Economics emphasizing in accounting, agronomy, and animal science. While going to college he worked for Thompson Brothers Trucking Service carrying mail within a 500-mile area of Fargo. They had three sons, Daniel, Steven, and Paul. From 1970-1973 Marvin was a grain trader for the Minneapolis Division of Bunge Corporation. In 1973 he was a regional manager for Na-Churs Plant Food Company until 1979. During that time the family lived in Aberdeen, SD, Devils Lake, ND, Bismarck, ND and Fort Wayne, Indiana. In 1984 the family moved to Minot, ND for six years. He drove a mail semi from Fargo to Williston. He drove as an owner/operator for Magnum for several years. The family moved to Fargo in 1990 and to Casselton in 2004. Marvin loved hunting and fishing with his sons. He also liked camping and traveling. He was a very good cook. He made donuts and cabbage vegetable soup for hunting trips. He taught all three sons to cook and bake. His pie specialty was butterscotch chocolate pie. He also had an interest in farming. During harvest he worked on various farms and he also worked at Remington Seed in Mapleton for a few years. Marvin is survived by his wife of 55 years, Gayle; sons, Daniel of St. Paul, MN, Steven (Ange) of Epping, ND and Paul (Missy) of Casselton, ND; grandchildren, Colton, Madi, Chase and Mayzee; great-granddaughter Carleigh; brother, Harold Evans of Milwaukee, Oregon; cousins, Gary Walker of Fargo and Bob Knecht of Alice, ND. He will be missed by many cousins, nieces, nephews and other relatives and friends. Marvin is preceded in death by his parents, George and Thelma Gutknecht and Opal Gutknecht; his sisters, Bernice, Shirley, Dora, Pauline and Bobby; brother, Ernest Mitchell and cousin, Dick Gutknecht.

Marvin's tribute video can be viewed here. https://www.tributeslides.com/tributes/show/8629DTSJ3JMPWDZ4 Marvin Carter Gutknecht of Casselton, ND passed away at Meadows Nursing Home in Fargo. He had been a resident there for eleven years after... View Obituary & Service Information

The family of Marvin Carter Gutknecht created this Life Tributes page to make it easy to share your memories.

Send flowers to the Gutknecht family.