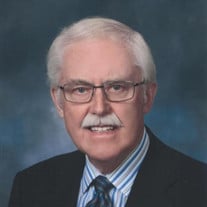 Marvin's service can be viewed here: https://vimeo.com/569376346 Marvin R. Duncan was born June 3, 1935 in Devil's Lake, North Dakota to parents Russell and Anna (Mohagen) Duncan of Calvin, North Dakota. He grew to adulthood on the family farm and was educated in Calvin public school. He finished high school at Oak Grove Lutheran High School in Fargo, North Dakota where he met his future wife, Janise Fedje, of Milnor, North Dakota. Marvin and Janise were married Oct 14, 1956. Marvin is survived by wife Janise (Fedje) Duncan, daughter DeAnn McCulloch (Ted McCulloch-spouse), son Steve Duncan (Margo Palmieri-spouse), son Paul Duncan (Yun Chao Shia-spouse) as well as two grandsons-Nathan Duncan and Liam Duncan. Marvin had great affection for & took great pride in his wife Janise's very successful and loving support of their family. His two grandsons, who graduated respectively from Cal Berkely & Purdue University, were great sources of pride and affection. Marvin is also survived by his twin sister Marilyn Moe (spouse-Darrel) and his younger brother David (spouse-Helen). Marvin graduated from North Dakota Agricultural College in 1957 with a bachelor's degree in agronomy. Upon graduation, he joined the family farm business where he developed its certified seed production and processing enterprises and developed one of the largest commercial Angus cowherds in North Eastern North Dakota. He was active in community and agricultural affairs in Cavalier County. He was a member of Glenila Presbyterian Church and was a member of the Organizing Commission of the Synod of Lakes and Prairies of the Presbyterian Church USA (PCUSA). Marvin left the farm business in 1972 and earned a Master of Science degree in agricultural economics at NDSU. He completed a Ph.D. in agricultural economics at Iowa State University and joined the Federal Reserve Bank of Kansas City as a research economist where he rose to the rank of Vice President and Economist. In that role, he was active in the development of two popular conference series, one of which focused on agricultural and rural policy, the other of which focused on monetary policy. Both series continue today. While at the KC Fed, Marvin also chaired the Food and Agriculture Committee of the National Policy Association, an independent policy think tank. In 1985, Marvin was recruited to be part of the rescue team for the Farm Credit System (FCS), a nation-wide cooperatively organized system of lenders to agriculture. He joined the system's Federal regulatory agency (FCA) as its Senior Deputy Governor, the Agency's chief operating officer. The FCS, a single purpose lender to U.S. agriculture, had fallen on difficult financial times during a several year period of high inflation and financial stress in U.S. Agriculture. Marvin worked within the FCA to support the Reagan Administration and the Congress in developing and implementing sound regulatory policy to help assure safety and soundness for the Farm Credit System Cooperatives. Three major pieces of legislation by the Congress created sound regulatory oversight for the FCS and provided financial assistance to the FCS in recapitalizing financially troubled FCS institutions. Early in the process Marvin was appointed to a seat on a new FCA policy board, a presidential appointment requiring Senate confirmation. In that role he was chairman of a newly created Insurance Corporation to help assure timely repayment of bonds and notes issued by the FCS to fund its lending activities to agriculture and he also served as Acting Chairman of the FCA for a year. In his role as a FCA board member he represented the Agency as a director of an international association of government related institutions lending to agriculture around the world, the Assemblee Generale De La Confederation Internationale Du Credit Agricole. Upon completion of his term on the FCA Board, Marvin joined the NDSU faculty as chairperson of its Department of Agricultural Economics. Following the NDSU Department Chairmanship, he joined the Office of the Chief Economist at USDA as a Senior Agricultural Economist where he conducted and managed research and policy analysis on renewable energy and biobased products. Marvin was a ruling elder in the PCUSA for more than 60 years as well as a deacon. He was active in Kiwanis, agriculture organizations and community efforts to address alcohol and drug addiction problems. His hobby was pairing his love of photography with his love of travel. Marvin lived in retirement with his wife, Janise, in Fargo, North Dakota. Marvin remained active in family farming interests. Marvin R. Duncan died April 12, 2021. A memorial service will be held Jun 30, 2021 at Hanson-Runsvold Funeral Home at 215 7th St S in Fargo. In lieu of flowers, the family asks that memorials be given to the First Presbyterian Church in Fargo, North Dakota.

The family of Marvin Russell Duncan created this Life Tributes page to make it easy to share your memories.

Send flowers to the Duncan family.