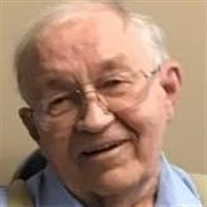 Marvin's service can be viewed here: https://vimeo.com/472295684 Marvin Leonard Conant was embraced by his loving Savior on October 25, 2020. He passed away at the age of 88 in his home at Eventide in Moorhead, MN. Marv was born on May 13, 1932, to Leonard and Anna (Waxler) Conant. Marv was raised and attended school in Mapleton, Pembina and Fargo before graduating from Oak Grove Lutheran High School in 1950. In 1950, Marv met Pearl Vivian Ronsberg while working at Pure Food Store, and after much pleading was granted a first date. The two married on August 2, 1953 at Gran Lutheran Church in rural Hawley and spent their near 61 years of marriage living in Moorhead, MN. After working at Pure Food Store, Marv went on to work at M. J. Sullivan Wholesale Grocer before purchasing Sunnyside Grocery in south Fargo in 1956. In 1958 he began working for Super Valu Inc. and then in 1969 Marv began his career with Cass Clay Creamery as the assistant office manager in the Fargo Office. He was promoted to Office Manager and later was also appointed Treasurer of the Co-op Board. Marv very much enjoyed his almost three decades at Cass Clay and had many wonderful friends there by the time of his retirement in 1996. As much as Marv loved his work and community at Cass Clay, nothing compared to the love he had for his family. It was a secret to no one how much pride and affection Marv had for his children, grandchildren, and great-grandchildren. He was quick to share his gratitude for having many of them nearby. After he and Pearl raised four beautiful children of their own, Marv enjoyed watching his family grow and wore his title of grandpa and great-grandpa with delight. Some of Marv’s favorite memories were large family gatherings for the holidays, especially Christmas; to be surrounded by those he loved filled him most. Marv’s passing has left a vast space in the hearts of those who love him and he is profoundly missed. Marv is survived by his daughter, Janice (Tim) Stoa; three sons James Conant, Jeffrey (Tammy) Conant, John (Mary) Conant; seven grandchildren, Nathan (Christina) Stoa, Daniel Stoa, Justin (Christine) Conant, Travis (Lauren) Conant, Becca (Brian) Anderson, Bradley and Kyle Conant; and six great-grandchildren, Brevin and Callie Stoa, and Rylan, Tenley, Rhys and Teya Conant. Marv was preceded in death by his beloved wife of 60 years, Pearl; his parents, Leonard and Anna Conant; and his sisters Lucille Thur and Loretta Crowder. Private service will be at 10:30am on Friday, October 30, 2020 and streamed at the link at the top of the obituary. Marvin's Tribute Video can be viewed here: https://www.tributeslides.com/tributes/show/MB3WZ4PCHBGJRQ36

Marvin's service can be viewed here: https://vimeo.com/472295684 Marvin Leonard Conant was embraced by his loving Savior on October 25, 2020. He passed away at the age of 88 in his home at Eventide in Moorhead, MN. Marv was born on May 13,... View Obituary & Service Information

The family of Marvin Leonard Conant created this Life Tributes page to make it easy to share your memories.

Send flowers to the Conant family.