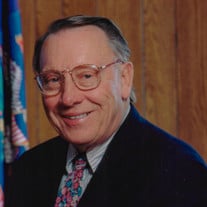 Not sure what to send?

Marshall W. Moore died Saturday, March 12, 2022, at Sanford Health in Bismarck, N.D., with his family by his side during his last days. They had a small, private service celebrating his life. Marshall was the second son born to Walter and Inga (Moe) Moore. He was born in Forbes, ND, on December 9, 1929. Several years later, he moved to Fargo, ND, with his family. He started school at Clara Barton and graduated college at NDAC in 1951, with a Civil Engineering degree. After graduation, he was in the U.S. Air Force until 1955. He served as a part of the 307th Fighter Interceptor Squadron as a F-84 fighter-jet pilot until November 1955. After retiring from active duty, Marshall served through the National Guard and Reserve Officers Association as a Lt. Colonel. From 1956 to 1960, he was employed by the Wisconsin Highway Department, where he worked on the design of the interstate from Eau Claire to St. Paul. In 1960, he returned to Fargo, where he co-founded Moore Engineering with his brother Clifford. Over the years, the civil engineering consulting firm grew and was successful. From 1981 to 1987, he represented District 44 In the North Dakota House of Representatives. In 1989, President George H.W. Bush appointed him as state director of the Farmers' Home Administration. He served as Governor Ed Schafer's ND DOT Director. While acting as Director, Marshall served as President of the Western Association of State Highway and Transportation Officials (WASHTO). From 1997-2000, he was a member of the Transportation Research Board. In 1997, Marshall was named Man of the year by the American Society of Highway Engineers. In 2000, he received the Elwyn F. Chandler Award from the National Society of Professional Engineers, the most prestigious award for professional engineers. He retired from the North Dakota Department of Transportation on February 18, 2000. He enjoyed many hobbies, such as hunting, fishing, and woodworking. After his retirement, he built kitchens for several of their children and cabinets for the lake home he shared with his wife, Rose Mary. He was an active member of his community, serving through his service clubs and as a church council member and president. Marshall and his family have belonged to and loved many churches as they have moved throughout the years. For years, they belonged to Hope Lutheran North. Most recently, they are members at Cormorant Lutheran Church and Moorhead Trinity Lutheran. He is survived by his wife of 70 years, Rose Mary. They have five children: Stephen and his wife Ling from Portland, OR; Paul and his wife Nina from Flagstaff, AZ; Jon from Bismarck, ND; Ann and her husband Larry Murphy, Brighton, CO; along with Sarah and her husband Randy Becker, Beulah, ND. His grandchildren, Ella Moore, Kyle (Marley) Murphy, Sean (Shanna) Murphy, Marshall (Kaitlynn) Becker, Patrick (Samantha) Becker, and Adam Becker, his great-grandchildren Marshall Becker, Maxwell Becker, Charlotte Becker, Dani Elayna, Cade Murphy, and Makenna Murphy. Marshall is also survived by his brother Clifford Moore and his wife Donalene; his sister Carol Aakhus and her husband Robert; two brothers-in-law, Robert Wright and Roger (Sharon) Wright; along with many nieces and nephews. He is preceded in death by his parents, Walter and Inga Moore, brothers Ronald and Jerome Moore, sister-in-law Marcella Moore, and brother-in-law Richard Wright. In lieu of flowers, please consider a memorial to Cormorant Lutheran Church (Casa de Fe) in Lake Park, MN; Trinity Lutheran Church in Moorhead, MN; New Life Center in Fargo, ND; the Salvation Army; or a charity of your choice.

Marshall W. Moore died Saturday, March 12, 2022, at Sanford Health in Bismarck, N.D., with his family by his side during his last days. They had a small, private service celebrating his life. Marshall was the second son born to Walter and... View Obituary & Service Information

The family of Marshall W. Moore created this Life Tributes page to make it easy to share your memories.