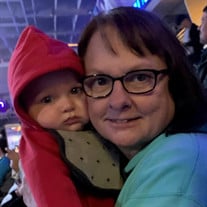 Marlys "Sis" Anderson, 56, of West Fargo, ND passed away on April 17, 2021 at Essentia Health of Fargo surrounded by loved ones. Marlys Ella Brown was born July 31, 1964 to the late Frank & Coreen Brown in Morris, MN. She graduated from Woodrow Wilson class of 1981. She married her first husband, Gary Bergenhagen in 1982 resulting in her daughter, Melanie Christopherson of Fargo. She later divorced and remarried the love of her life Brian Anderson in 1993 resulting in her son, Josh Anderson of Fargo. In marrying Brian, she also gained two step sons, Brian and Benjamin Anderson of Fargo. Marlys went on to continue her education at the Moorhead Technical college graduating in 1991. She spent the majority of her career working for Blue Cross & Blue Shield, American Family, and Cigna working in health insurance as a Claims Adjuster. This was a career she very much enjoyed and excelled at! Marlys enjoyed cooking for others and sharing recipes. You could often find her reading a cookbook or making up recipes! On weekends you could find her at her twin sister's (Marlene "Tutt" Brown) enjoying the outdoors, riding four wheelers, and being the camp cook. She also enjoyed thrifting, camping, and most importantly spending time with her family. Her face would light up whenever she was around or talked about her grandchildren, Andrew, Maggie, Leia, Aria and Braden. Marlys is survived by her husband Brian Anderson of West Fargo, ND; her daughter Melanie (Mark) Christopherson and grandson Andrew of Fargo,ND; her son Josh (Kimberly) Anderson and granddaughter Maggie of Fargo, ND; her two step sons, Brian (Jeanenne) Anderson and grandchildren Aria and Braden of West Fargo, ND, and Benjamin Anderson and granddaughter Leia of Fargo, ND. She is also survived by six siblings: Darlyne Eyestone of Fargo, Dorie (Dean) Koppelman of Fargo, Dennis (Meihua Wu) Eyestone of West Fargo, Paul Eyestone of Plymouth, MN, Barry Eyestone of Fargo, ND and Marlene (Frank) Brown of Fargo. Marlys is survived by numerous nieces and nephews: Jessie, Tina, Jenny, Opal, Amber, Autumn, Iris, Brady, Gavin, Angie, Daren, Denise, James, and Hope. Marlys was preceded in death by her parents Frank and Coreen Brown, five brothers: Frank Brown, Richard Brown, Kelly Brown, Lee Brown and Dale Eyestone. A private family service will be held on Saturday, May 1, 2021. If you would like to send any condolences or anything, the family requests you send them to: Brian Anderson 2842 7th St. W. Apt. 101 West Fargo, ND 58078

Marlys "Sis" Anderson, 56, of West Fargo, ND passed away on April 17, 2021 at Essentia Health of Fargo surrounded by loved ones. Marlys Ella Brown was born July 31, 1964 to the late Frank & Coreen Brown in Morris, MN. She graduated from Woodrow... View Obituary & Service Information

The family of Marlys Ella Anderson created this Life Tributes page to make it easy to share your memories.