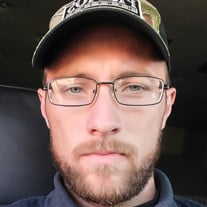 Marlin's Memorial Service will be streamed here: https://vimeo.com/434854996 Marlin (JJ) John Klatt, 31 years of age, passed away on Monday, June 29, 2020, at Sanford Medical Center, Fargo North Dakota. JJ was born March 1, 1989, in Fargo North Dakota at Dakota Hospital to his parents, Marlin Ackerson and Kathy Klatt, the oldest of two children. JJ lived in Fargo during his childhood years, the family then relocated to Phoenix, Arizona in 2001. He graduated in 2007 from Corona Del Sol High School in Arizona. He then attended Technical School to become a Semi Driver, graduating in 2010 in Phoenix, Arizona. JJ relocated to Kansas City for a few years, driving Semi-Truck, then was a flatbed truck driver as an owner-operator for a year, then relocated back to Fargo, ND. JJ was employed at Northern Pipe Products in Fargo as a Production Line Lead and has been employed there since May 17, 2017. Fishing was JJ’s life long passion; he enjoyed ice-fishing along with going to the lakes; he would even go alone to get in as much fishing time as possible. He also enjoyed going to the gun range, spending time with family and friends, listening to country music and most importantly, spending time with his beloved dog Daisy, who he loved more than life. Daisy and JJ shared a special bond. JJ had a big heart; he loved and cared for his family and friends. He always made sure to let you know he was there. JJ had a special way of making you laugh and smile, making his presence know. JJ leaves cherished memories with his father, Marlin, mother, Kathy, sister, Matraca (Madi) Nichols, a niece, several cousins, and many friends that JJ loved and cared about. JJ met his girlfriend Kaylee Reierson, the love of his life; moving to the next chapter in their lives. JJ is preceded by death by his uncles Dale Klatt, Duane Klatt, JR, and Kermin Vangerud Sr.; cousin Kermin Vangerud, Nephew; Kelsey Klatt, Aunt; Karen Sorsen, grandfather; Kelsey C. Klatt Sr, and grandmother Lillian Klatt. JJ's Tribute Video can be viewed here: https://www.tributeslides.com/tributes/show/QDKN8M7J3WB6MW8D

The family of Marlin (JJ) John Klatt created this Life Tributes page to make it easy to share your memories.

Send flowers to the Klatt family.