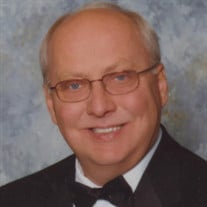 Mark's Funeral Service will be livestreamed here at 10am, Sat. Feb. 13 and can be viewed later as well: https://vimeo.com/509940733 Mark Oliver Holman, 70, was born November 15, 1950 in Breckenridge, MN to Oliver and Inez (Henjum) Holman. He graduated from Dickinson High School and Minnesota State Community and Technical College, Moorhead, MN. On June 1, 1974 he married Roberta (Bobbie) Aspelund at First Presbyterian Church in LaMoure, ND. They lived in Fargo and enjoyed summers at their cabin on Lake Lida, Pelican Rapids, MN. Mark worked at Simonson Lumber as Hardware Manager for many years and then worked part-time at Burggraf’s Ace Hardware. He retired in 2010 due to declining health. Mark’s affiliations with the Masonic and Shrine fraternities were very important to him. He was a Past Master of Eastgate Masonic Lodge, past president of El Zagal Shrine Oriental Band, and Past Patron of Mecca Chapter Order of the Eastern Star. He was also a past advisor of the Moorhead Demolay for Boys and a past Rainbow Dad for the International Order of Rainbow for Girls organizations. He was a member of First Presbyterian Church. He also was a member of the Advisory Council for MN State Community and Technical College in Moorhead. Mark’s family was very important to him and he was very proud of his son, daughter, and four grandsons. He enjoyed attending as many of the grandson’s activities as possible. Mark is survived by his wife, Bobbie; son, Greg of West Fargo, ND; daughter, Kimberly (Shawn) Bogart of Sioux Falls, SD; daughter-in-law, Jodi of Prairie Rose, ND; and four grandsons: Andrew & Elijah Holman and Benjamin & Oliver Bogart. He is also survived by his brother, David (Andrea) Holman of Jonesboro, Arkansas. Mark was preceded in death by his parents and brother, Terry Holman. Mark's Tribute Video can be seen and copies ordered here: https://www.tributeslides.com/tributes/show/QYF27C4QRQS2K49N

The family of Mark Oliver Holman created this Life Tributes page to make it easy to share your memories.

Send flowers to the Holman family.