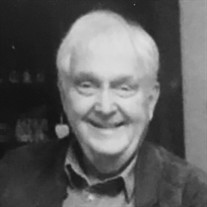 Mark's Service will be available at 11am, Saturday, October 10 at this link: https://vimeo.com/465562378 The Graveside Service can be viewed here: https://vimeo.com/468145803 Mark Andrews II was born May 19, 1926, in Fargo, North Dakota. He died on October 3, 2020. He was 94. Mark II was the son of his namesake, Mark Andrews I, also known as the singing sheriff because he sang with the Metropolitan Opera in New York before returning to the family farm near Mapleton, North Dakota and meeting and marrying Mark II's mother, Lillian Hoyler, a Kindergarten teacher from Escanaba, Michigan. As a young boy, Mark II lived in the Sheriff's house, a large brownstone behind the Cass County Courthouse in Fargo. Mark's life abruptly changed when his father was seriously injured during a high speed chase of boot leggers and then died. Young Mark was twelve when he and his mother and sister moved to the Siegel Apartments in Fargo. Fortunately although they had very little, his mother always made her children feel secure. In 1939 Mark was in 8th grade at Agassiz Junior High when he met his best friend, Mary Willming. They married on June 29, 1949, and celebrated their 71st wedding anniversary (81 years of friendship) less than three weeks before Mary's death on July 16, 2020. Mark served in the United States Army 1944-1946 as a cadet at the United States Military Academy, West Point, New York, until receiving a disability discharge in 1946. He then returned to North Dakota and attended NDSU where he was proud to be a Sigma Chi and graduated in 1949. He married his best friend and took over management of the family farm, eventually purchasing the land and operating a cattle feed lot. Mark served as a director of the Garrison Conservancy District 1955-1964 and was a member and past president of the North Dakota Crop Improvement Association. Mark's degree from NDSU was in agricultural science. Mary's degree from Smith College was in political science. Soon politics became an interest. Mark was a Republican National Committeeman 1958-1962. He was elected to the Eighty-Eighth United States Congress by special election October 22, 1963 to fill the vacancy caused by the death of Representative Hjalmar Nygaard; he was re-elected to eight succeeding congresses serving North Dakota in the United States House of Representatives from October 22, 1963 until January 3, 1981. He was elected to the United States Senate in November 1980 with 70% of the vote and served North Dakota there from January 3, 1981 to January 3, 1987. Mark worked hard to serve his state in Congress and was remarkably adept at finding and forming alliances to accomplish good and get problems solved. He frequently said, "You know in those days people from both parties worked together and we got things done - Quentin Burdick was a good Democrat and I was a good Republican but we were good friends and we worked together for North Dakota. This not working together is foolishness!" Following his political career Mark and Jacqueline Balk-Tusa established a successful consulting firm based in Washington, DC; he served as a director of Tenneco, Inc. and as a director of Nodak Mutual Insurance. Mark was blessed with a long and wonderful life. He was so large at 6'4" and full of stories and love for his family, his farm and his state that it is hard to believe he can be gone. Our sadness is tempered by our knowledge that he is once again with his best friend of eighty-one years and at peace. Those blessed to mourn Mark are his sister, Barbara Bertel; his children, Mark III (Sue), Sarah (Doug Herman) and Karen; grand and great-grandchildren: Mark Andrews IV, Katie and Aaron Locke and their children, Lucy and Staton; Matt and Poli Herman and their children, Henry and Caroline; Sam and Mia Herman and son, Gage and Joe and Kristin Herman. Mark and his family were blessed by his excellent caregivers, especially Missy Williams, Elaina McDonald and Allison Brocht. Due to the Covid Pandemic, there will be a private family service which will be simulcast-and/or available for later viewing by friends who may wish to join in the celebration of Mark’s life. The link to the simulcast can be found at www.hansonrunsvold.com In lieu of flowers, Mark asked that any memorials be given to Gethsemane Cathedral Foundation or to a favorite charity of the donor’s choosing.

The family of Mark Andrews II created this Life Tributes page to make it easy to share your memories.

Send flowers to the Andrews family.