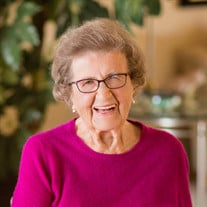 Marjorie's funeral service can be viewed here. https://vimeo.com/697452561 Marjorie's tribute video can be viewed here. https://www.tributeslides.com/tributes/show/CNRZ2BL4CJGN5G4R Marjorie Marian (Brandt) Demro of Moorhead was 96 years old when she was welcomed into the kingdom of heaven on April 3, 2022. Born on September 22, 1925, in Fargo, ND, Marge was the ninth of ten children born to Anna (Krabbenhoft) and Carl Brandt. She became a child of God when she was baptized at Trinity Lutheran Church in Sabin, MN, and was confirmed in her faith at Trinity Lutheran Church in Amenia, ND. She graduated from Amenia High School in 1943 and went on to North Dakota Agricultural College (now NDSU), where she received her BS in 1947. Marge was an adventurer of her time, spending a semester at Iowa State University and traveling to New York City with a friend as a young woman, staying at the Waldorf Astoria and enjoying Mary Martin in Peter Pan on Broadway. Marge enjoyed sports as well, playing and coaching girls basketball. She taught school in Buffalo, ND, and Plentywood, MT before moving to Nashua, Iowa, to help her brother and sister-in-law open a restaurant. Marge was very picky, but that worked in her favor when she found the perfect man for her in Nashua, Richard Demro, who was the love of her life. The two married on November 4, 1951, at Grace Lutheran Church in Fargo, ND, in the middle of a snowstorm. Dick and Marge's life together was blessed with three children - Thomas, Kay, and Jane - and 69 years of marriage. Marge spent most of her career teaching in the Fargo Public School System, the majority of those years at Ben Franklin Junior High School. She taught language arts and home economics to students in special education. Family time included weekends at the lakes and enjoying time fishing. After raising their family and retiring from work, Marge and Dick spent many wonderful years collecting and selling antiques. Marge served as a Sunday school teacher and was a friend to many from Immanuel Lutheran Church in Fargo, where she and Dick were charter members. She also enjoyed lifelong friendships with her Little Ben teacher friends, dealers in antique circles, and neighbors in South Moorhead. Marge was a devoted daughter who lovingly cared for her mother for many years. She was the ultimate hostess for family and friends, enjoying a big celebration or simple social time around the kitchen table. She made holidays special for her family and did everything out of a fierce love for each of them. Thomas (Julie), Kay (Ken), Runkle, and Jane (John) Lottes treasure the strong and caring mother God gave them. Marge was a hardworking, loving provider who modeled for her children the importance of faith, family, education, and compassion. She was loved deeply by her three children; 11 grandchildren - Laura (Kamran) Khaghany, Joshua (Lana) Runkle, Anna (Luke) Fasoldt, Mary (Reilly) Smith, John R. (Meg) Lottes, Christine (Jon) Zinno, Matthew (Samantha) Lottes, Anna (John) Snare, Mark Lottes, Cole and Cade; 10 great-grandchildren - Allison and Lexi Khaghany, Piper and Gideon Runkle, Lily, Zoe, and Anastasia Zinno, Adelaine Smith, and Jack and Beau Lottes; and her extended family of siblings, in-laws, nieces, and nephews, many of whom were her Godchildren. Marge is survived by her sister, Barbara (Robert) Schuler, as well as her sister-in-law, Helen Brandt. She was preceded in death by her loving husband Dick, her parents Anna and Carl, brothers Roland, Norman, Rudolph, Stanley, and Charles, sisters Loretta, Helen, and Gert, as well as many of her brothers- and sisters-in-law. In lieu of flowers, memorial gifts can be made to Grace Lutheran School in Fargo, Long Island Lutheran High School in Brookville, NY, or the American Bible Society. https://gracelutheranschoolfargo.com https://luhi.org https://americanbible.org

The family of Marjorie Marian Demro created this Life Tributes page to make it easy to share your memories.

Send flowers to the Demro family.