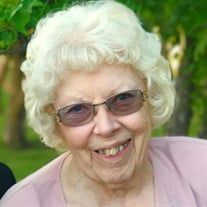 Celebrating the life of Marilyn A. Jones Marilyn was born in Fargo, ND to Paul and Clara Baker on February 25, 1932. She grew up in Fargo and graduated from Central High School. After high school she attended North Central Bible College (now North Central University) in Minneapolis. It was there she met the love of her life, Jerral C. Jones. While in college they ministered together in local churches in Minneapolis. Mom’s musical abilities were always a welcome addition, often playing piano or accordion as part of their ministry. After college Marilyn and Jerral embarked on full time ministry, pastoring churches in Sleepy Eye, Glencoe then Pine City, Minnesota. While in ministry they welcomed three boys into their family, Jerral (Jerry) Jr., Kendall and Loren. In 1960 they relocated to Fargo to be closer to her parents. They purchased a home in south Fargo not far from her childhood home. Together they continued their ministry through active participation in their local church (First Assembly, now Northview) while raising their children. You could usually find Marilyn at the piano, singing in the choir, or performing a beautiful solo on any given Sunday, continuing to use her talents in service to her Lord Jesus Christ. For many years she made weekly visits to several area nursing homes to play and sing for the residents. She was active in Child Evangelism Fellowship, Aglow International, and sang in the interdenominational Primetime Choir for many years. But dearest to her heart was her weekly time with her ladies prayer group with whom she met to share praise reports, and then pray for every need any of them brought with them. She shared her love for music with countless students over nearly a half century of music teaching. She taught both piano and accordion lessons in her home. Her boys can attest to the fact that their home was always filled with melodic (and some not-so-melodic) strains while growing up there. Marilyn was an active member in the Fargo-Moorhead Music Teachers Association, serving on their board and in many other capacities for more than thirty years. She was instrumental in forming the Accordion Band under the auspices of the local Sons of Norway, in which both she and Jerral played throughout the state of North Dakota. Marilyn had a wonderful sense of humor and an infectious laugh that was shared easily and often, and many times with her Red Hat Ladies group (the BeHatitudes) on their various adventures. Marilyn met her Lord and Savior late on Thursday, April 29th. She was survived by her loving husband, Jerral, who joined her five days later on May 4th. She is survived by her three boys, Jerry Jones, Jr. (Jean), Kendall Jones, and Loren Jones (Gail); their five grandchildren Kari Verhulst (Barney), Tami Soyring (Eric), Joshua Jones, Tessie Schwanke (Tyler) and Ariston Jones (Sarah); four great grandchildren, Savannah Erb (Stephen), Gabe Soyring, Isabella Verhulst, and Jace Verhulst; and two great great grandchildren, Kingston Erb and Presley Erb. A visitation for Jerral and Marilyn will be held from 4pm-6pm on Sunday, May 10, 2020 at Hanson-Runsvold Funeral Home, Fargo, ND. The funeral service for Jerral and Marilyn will be streamed here at 11am, Monday, May 11, 2020.

Celebrating the life of Marilyn A. Jones Marilyn was born in Fargo, ND to Paul and Clara Baker on February 25, 1932. She grew up in Fargo and graduated from Central High School. After high school she attended North Central Bible College (now... View Obituary & Service Information

The family of Marilyn Avis Jones created this Life Tributes page to make it easy to share your memories.

Celebrating the life of Marilyn A. Jones

Marilyn was born in...