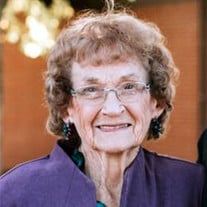 Marian Elenor (Bartness) Morken was born in Elbow Lake, Minnesota in January 18th, 1925 to parents Sophus Bartness and Helga (Holt) Bartness. Marian graduated from Elbow Lake High School where she was class president. Her employment began at Hotel Glende in Elbow Lake, as a waitress in the café in high school, she also worked at Archer Daniel Midland, Commander Larabee Milling Company, 7-Up Bottling Company in Minneapolis & Norby & Herberger Stores in Grand Forks & was also involved in Camp Fire Girls. She met her future husband Harding (Ed) Morken in Elbow Lake, while waitressing at the café, when he was stranded there during a blizzard. They were married for 57 years, full of family and adventures. When Harding entered college, Marian changed from retail work to seasonal work picking and seeding potatoes. With some of those earnings, they bought their first movie camera which recorded many family events, both big and small. As they both placed the highest value on their family, the priority was always the care and nurturing of those relationships. Marian devoted herself to the care of their six children. She was preceded in death by her husband (2002) and son Jeffrey (2011) She is survived by daughter Jennifer Lewis (Don) of Denver, son Jonathan (Vicki) of Vail, daughters Janet (Bill Carlson) of Apple Valley, MN, Joanna of Denver, and son James (Carol) of Fargo, ten grandchildren and 5 great grandchildren. Marian enjoyed good health and a very active, independent life until the day she suddenly departed. She was an active member of Messiah Lutheran Church where she gathered weekly with her quilting buddies and spent her summers at Pelican Lake with her family sharing stories around the campfire. She didn’t believe in acting her age and instead, believed in doing what sounded like fun, so she traveled as often as she could, downhill skied into her 80’s and went white water rafting at 87. Last summer she even participated in two, eight mile bike rides with her son Jon. Her zest for life never waned. As per her request, in lieu of a funeral, but rather a celebration of her life will be held June 16 at Fair Hills Resort Pavilion from 1-4pm to gather and reminisce and where some of those many reels of home movies will be available for viewing. One of her written wishes is that we take a moment to sing the Lord’s Prayer, so this weekend as you gather with friends and family consider singing along in her memory. Marian will be missed greatly but her love for all of us lives on as does our love for her. We are blessed to have been a part of her life and her a part of ours. If you would like to send a card with fond memory of Marian, mail to: 484 F 19th Ave W. West Fargo, ND 58078. Honorariums may be sent to the New Life Center at 1902 3rd Ave N, Fargo, ND 58012. Memories and condolences may be shared by visiting www.hansonrunsvold.com. Arrangements by Hanson-Runsvold Funeral Home – Fargo, ND

The family of Marian E. Morken created this Life Tributes page to make it easy to share your memories.

Send flowers to the Morken family.