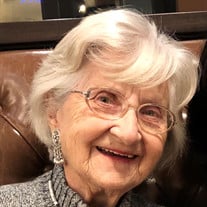 Marguerite Siegel Kiest, 92, of Fargo, ND, passed away on Saturday, March 6, 2021 at Eventide Fargo. Marguerite was born on December 19, 1928, the youngest of ten children born to John and Pauline (Matz) Siegel. She grew up on a farm north of Mandan in Morton County, near the Cross Ranch. She attended country grade school then high school in Mandan. After high school graduation, she attended Dickinson State Teachers College where she received her teaching certificate. She taught country school for several years then attended Capitol Business College in Bismarck. Marguerite worked at Quain and Ramstad Clinic in Bismarck before moving to Billings, MT. In 1958, she married Harry Kiest and moved to Goodrich, North Dakota where they farmed and she worked in the local bank for 23 years. In 1982, Marguerite moved to Fargo where she spent a lot of time with her daughter, Roxane, and three grandchildren, Jon, Liz and Chris. She worked at First Bank and Metropolitan Bank, retiring at age 65 but continued to work part-time at First Bank, then Viking Bank in Moorhead until she was 76 years old. Marguerite traveled extensively, visiting China, Japan, many countries in Europe, Mexico, Ireland and more recently she was a frequent traveler to England where her granddaughter Liz resides. She traveled regularly to North Carolina and Colorado to visit grandchildren Jon and Chris and their families. Her biggest joy in life was her grandchildren and great-grandchildren to whom she was fondly known as “Gigi.” She was an avid reader and loved puzzles. She spent many happy summers at Pelican Lake at the family cottage on Broadwater Beach where she enjoyed being outside, spending time with family, picking up sticks, chatting and having happy hour with neighbors. Marguerite moved from her condo to Crosshaven at Riverview Place in 2019, and in January she moved to Eventide Nursing home. Her family would like to thank the staff at Riverview Place, Eventide and Hospice of the Red River Valley for surrounding her with loving care. She is survived by daughter, Roxane Case (Donald Peterson), Fargo; grandchildren, Chris Case (Brenda), Edwards, CO; John Case (Laura), Cary, NC; Elizabeth Walker (Andrew), Peaslake, UK; six great-grandchildren, Cash, Jasper and Major Case, CO; Nate and Alex Case, NC; and Audrey Walker, UK; brother, Theodore Siegel, Casper, WY; and many nieces and nephews. She was preceded in death by parents, John and Pauline Siegel; sisters, Olga Hillstrom, Catherine Olander, Barbara Hermanson, Elizabeth McBain, Charlotte Stark, Pauline Waddle, Monica Morgan; and brother, John Siegel. In lieu of flowers, please consider a donation to Riverview Place, Hospice of the Red River Valley or a charity of your choice. A Celebration of Marguerite’s life will be held this summer.

Marguerite Siegel Kiest, 92, of Fargo, ND, passed away on Saturday, March 6, 2021 at Eventide Fargo. Marguerite was born on December 19, 1928, the youngest of ten children born to John and Pauline (Matz) Siegel. She grew up on a farm north... View Obituary & Service Information

The family of Marguerite Siegel Kiest created this Life Tributes page to make it easy to share your memories.

Marguerite Siegel Kiest, 92, of Fargo, ND, passed away on Saturday,...

Send flowers to the Kiest family.