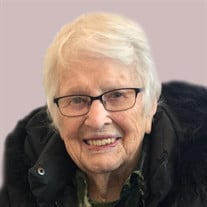 Marge Stenberg, 96, of Fargo, ND, passed away peacefully at Bethany on University on Tuesday, September 28, 2021. Marge Stenberg lived a long and happy life. Marjorie Martha Spilde was born April 21, 1925 in Halma, Minnesota to Cora (Thompson) and Severt Spilde. She grew up in the farming community and graduated from Karlstad High School. She then attended Bemidji State College for two years and received her teaching certificate. She began teaching in Oklee, Minnesota where she met and married Arnold Stenberg when he was home on leave after WWII. They raised six children all of whom went on to earn college degrees. Marge loved teaching and was happy to return to it when her children were school age. At the same time she spent summers earning her full bachelors degree from Bemidji State. She taught various subjects ranging from fourth grade to physical education and remedial reading. She always enjoyed running into her former students. They were all special to her. She was also active in her church and in community events. She helped start the Lost River Ramblers 4-H group. She loved wood carving, quilting, sewing, gardening, painting, and other artistic endeavors. After retirement she continued her love of teaching by helping others share her craft activities. When Marge and Arnold retired they traveled throughout the United States and some foreign countries. They spent a full year touring the US in their motor home. Summers were spent up at Lake of the Woods by Baudette and winters in various locations until they settled in Mesa, Arizona. They made many long term friends in both locations. It was only in the last few years after Arnold's death that Marge settled in Fargo permanently. Marge is survived by her 6 children and their spouses, grandchildren and many great grandchildren. Lynn and Frank Tallon live in Oconomowoc, WI. Kathy and Gary Williams live in Springfield, IL. Ginny and Bill Newman live in Fargo, ND. Arnie and Elle Stenberg live in Kingston,TN. Ken Stenberg lives in Phoenix, AZ. Bill and Kelley Stenberg live in Severance, CO. Grandchildren live in CO, IL, MN, ND, SD, and WI. She was preceded in death by her husband, Arnold; one brother; and two sisters. A memorial service celebrating Marge's life will be held at a later date when the family can gather. Burial will take place at Zion Cemetery in Oklee, MN.

The family of Marge Stenberg created this Life Tributes page to make it easy to share your memories.

Marge Stenberg, 96, of Fargo, ND, passed away peacefully at Bethany...

Send flowers to the Stenberg family.