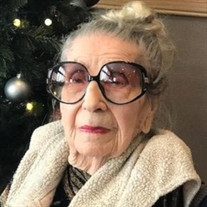 Margaret Lane, 102, died Tuesday, May 26 in Hadley House, Perham, Minnesota Wit, grit, will. A woman ahead of her time… of style and substance. A life well lived. Margaret Lucille Lane was born May 2, 1918 in Bowbells, ND to Sarah and Mortimer Drew. Proud of her Scottish heritage, it prepared her for a life that depended upon it. After high school graduation, she owned & operated Drew’s Cafe in Bowbells. A Seattle move followed - lauded by Margaret as her best decision where she worked for Boeing Aircraft as a B17 escape hatch mechanic. Drawn to adventure, Douglas, Arizona was her next home working for the famous Gadsden Hotel where she served meals for the desert western movie sets. There, she met Bradford Franklin Lane, a southern gentleman calling Hollywood his home. At 36, their wedding vows were exchanged at the Wee Kirk O’ The Heather Wedding Chapel in Las Vegas, Nevada (credited as the first wedding chapel in Las Vegas). Margaret remembers this as her happiest day. Since, from southern California, she introduced her “prairie” North Dakota family to avocados, Hadley Orchard dates, the Santa Anita Race Track, imported linens, and an esprit d’ corps previously unknown. Margaret had many loves in her life beyond family, not the least of which was travel, bacon and "Jack Daniels". Generous by nature, Margaret gifted family in many ways. Passing May 26 at Hadley House, Perham, MN, she will be fondly remembered as quintessential, liberal, and a woman like no other. At 102, Margaret outlived the Spanish flu and most of her family. She is survived by her niece; Kathy Okland (Dirk) and their sons, Drew and Elliot, Jan Campbell and great nieces, nephews and their families. Interment will occur at San Jacinto Valley Cemetery at a later date. Memorials are preferred to Hospice of the Red River Valley. The family expresses their deepest appreciation to Hadley House, staff and residents, Hospice of the Red River Valley, volunteers and all who recently participated near and far to celebrate her recent birthday. See: https://www.dropbox.com/sh/i9pgpyq3mz06dr4/AAAEgbLanXNMkFQMWsFnS8uIa?dl=0

Margaret Lane, 102, died Tuesday, May 26 in Hadley House, Perham, Minnesota Wit, grit, will. A woman ahead of her time&#8230; of style and substance. A life well lived. Margaret Lucille Lane was born May 2, 1918 in Bowbells, ND to Sarah and... View Obituary & Service Information

The family of Margaret Lucille Lane created this Life Tributes page to make it easy to share your memories.

Send flowers to the Lane family.