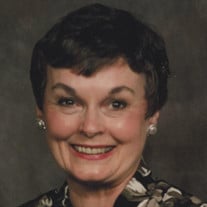 Margaret's service can be viewed here: https://vimeo.com/455819685 Margaret Ann Carlson Grove passed away peacefully under the care of Edgewood Vista and Hospice of the Red River Valley on August 29, 2020. Margaret Currier was born on May 27, 1924 in Minneapolis, MN to John Joseph and Marguerite (Griffis) Currier. She attended Minneapolis Public Schools and graduated from Washburn High on June 5, 1942. Maggie married John E. Carlson on May 18, 1946, at Mt. Olivet Lutheran Church in Minneapolis. They met one Sunday after John saw her singing in the church choir and followed her home. They made their home in Fargo where Margaret worked for WDAY. Together they had 3 children, John Richard, Becky Ann (Tim) O’Keefe and Todd (Kris) Carlson. Maggie was preceded in death by her first husband of 56 years, John E. Carlson, her son, John, and brother Dick Currier. Maggie was also preceded by her dear second husband, John Grove. She is survived by daughter Becky (Grand Forks) and son Todd (Pelican Lake); 5 grandchildren, Joel Carlson (Jill), Erinn Hakstol (Dave), Katie O’Keefe Hale (Ryan), Cole Carlson and Rhett Carlson, both of Fargo, and 5 great grandchildren. Margaret possessed a beautiful singing voice and sang professionally in the area for years. She sang at dozens of wedding and funerals. She was a founding member of the Fargo-Moorhead Civic Opera and performed in many of their productions. She was a devoted member of the Elim Lutheran Church Choir. Margaret was a member of the Fargo Fine Arts Club, Chapter AM of PEO, Fargo Music Club and Round Table. Maggie was a fabulous cook and homemaker. Her home was always filled with great food and beautiful music. She was the quintessential grandmother and will be greatly missed by all. The Carlson and O’Keefe families would like to thank Edgewood Vista, Glens Place and Hospice of the Red River Valley for their gentle care in the last months of her life. The family has designated Hospice of the Red River Valley for memorial contributions. A private memorial service will be held at a later date.

Margaret's service can be viewed here: https://vimeo.com/455819685 Margaret Ann Carlson Grove passed away peacefully under the care of Edgewood Vista and Hospice of the Red River Valley on August 29, 2020. Margaret Currier was born on May... View Obituary & Service Information

The family of Margaret Ann Carlson Grove created this Life Tributes page to make it easy to share your memories.