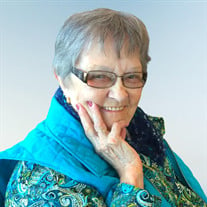 Marcella's service can be viewed here: https://vimeo.com/689875021 Marcella Burnette Ferch was born January 31, 1929 at Edgeley, North Dakota, the daughter of Eli and Marie (Holman) Ferch. Her family moved to a farm near Verona, ND when she was a young child. She graduated from Verona High School. She was baptized and confirmed at St. John's Lutheran Church of Verona. On June 4, 1950, she was united in marriage to Ralph Mangnall. They made their home and raised their family in Oakes, ND. Marcella was active in her church, Grace Lutheran Church of Oakes, where she served as Financial Secretary, taught Sunday School and was Sunday School Treasurer. She was an active member of the ALCW, the local Homemakers Club, Active Arts Association, and the Hospital Auxiliary. She moved to Fargo in 2005. She became a member of Olivet Lutheran Church and was involved with the quilting club. Marcella had a quiet but generous nature and was ever ready to lend a helping hand. She always said that God, family and her home were her life. She had a delightfully wry sense of humor and an infectious smile. She was renowned for her ethnic Scandinavian and German cooking. Her even temper was instructive and, when asked how she was doing, would typically answer, "I can't complain." Marcella is survived by her two children, Richard (Jacqueline) of Rapid City, SD and Paula (Paul) Perez of Fargo, ND; four grandchildren, Anthony Mangnall, Jonathan Mangnall, Paul (Camille) Perez III and Ryan (Heather) Perez; two great-grandchildren, Abigail Perez and Mason Perez and a brother, Marlin Ferch. She was preceded in death by her parents, a sister, Lucille and Ralph, her husband of 52 years. A visitation will be held on Friday, March 18, 2022 from 5PM-7PM at Hanson-Runsvold Funeral Home, with a prayer service following at 7PM.

Marcella's service can be viewed here: https://vimeo.com/689875021 Marcella Burnette Ferch was born January 31, 1929 at Edgeley, North Dakota, the daughter of Eli and Marie (Holman) Ferch. Her family moved to a farm near Verona, ND when she... View Obituary & Service Information

The family of Marcella Burnette Mangnall created this Life Tributes page to make it easy to share your memories.

Send flowers to the Mangnall family.