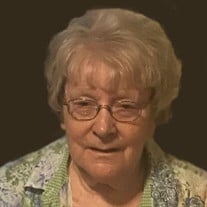 Marcella's will be live-streamed here: https://vimeo.com/503875732 Marcella's Tribute Video can be viewed here: https://www.tributeslides.com/tributes/show/XN925RS84GTY3FD6 Marcella Eleanor (Weik) Johnson, age 87, passed away peacefully January 17, 2021 at Edgewood Vista Memory Center in Fargo, North Dakota. Marcella was born September 19, 1933 in Rothsay, Minnesota. She was the eighth out of nine children. She graduated from Rothsay High school in 1951, where she was a cheerleader. Marcella met Earl Johnson while waitressing in Fergus Falls, MN. They married on October 15, 1955. Earl and Marcella moved around the tri-state area for his job as a telephone installer for western electric. They settled down in Bismarck, North Dakota and had two daughters, Bonnie and Michelle. In 1962 they bought a home in North Fargo and lived there until 2012 when they moved into Edgewood Vista Assisted Living Center in Fargo. Marcella lost Earl just shy of their 60th wedding anniversary. Marcella was a stay at home wife and mother until her daughters were in Junior High. She then worked as a bookkeeper for Vanda beauty counselor. She later worked at Norwest Bank, now Wells Fargo, where she made life-long friends. Marcella and Earl were active in their church and members of Hope Lutheran Church for over 60 years. Marcella was an excellent housekeeper and seamstress and sewed most of her daughters’ clothes. She enjoyed bowling and playing bridge. She was famous for her lefse. Marcella and Earl loved spending time at the lake with family and friends. Marcella was always there for her children and would do anything for them. She was a devoted grandmother and actively attended her grandchildren’s activities. Marcella is survived by her daughters, Bonnie (Tim) Doyle of Fargo, ND; and Michelle Johnson Williams of Tulsa, OK. Grandchildren, Dr. Tiffany Doyle (Darren Werness), Jasmine Doyle and Blake Williams. Siblings, Walter Weik, Dorothy Jorgenson, Doris Jorgenson, Phyllis Van Wechel and numerous nieces and nephews. Preceded in death by her husband, Earl Johnson, parents, Wilhelm and Alma (Halbakken) Weik, siblings Margaret Thomas, George Weik, Marvin Weik, Ardis Hovland and numerous nieces and nephews. A funeral service will be at 2pm, Saturday, January 23, 2021 at Hanson-Runsvold Funeral Home. Visitation will be held one hour prior to the service. Burial will be in Sunset Memorial Gardens, Fargo. The service will be live-streamed on Hansonrunsvold.com.

The family of Marcella Eleanor Johnson created this Life Tributes page to make it easy to share your memories.