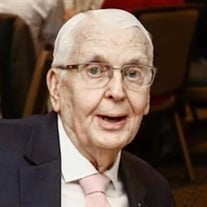 Lyle's Video Tribute can be viewed here: https://www.tributeslides.com/tributes/show/P94GDF5QZXDCHFFY Lyle Johnson, 91, of Fargo, died on Saturday, May 30, 2020 of Covid-19. Lyle was born on April 13, 1929 to John and Nettie (Nedrebo) in Fessenden, ND. He graduated from Bottineau High School and from UND, majoring in accounting and became a CPA. Lyle married Irene Hoff on June 2, 1957 in Gardena, ND. They moved to Fargo where he began his career at the accounting firm of Broecker Hendrickson and ended his career at Kost Brothers in Moorhead, MN. Lyle was a lifelong member of First Lutheran Church and was very active in many community service groups. In retirement, Lyle and Irene, his wife of nearly 63 years wintered in Peoria, Arizona and then in Wesley Chapel, Florida. They enjoyed spending the summer back here in Fargo and at their lake home on Pelican Lake. He enjoyed traveling, puzzles, watching NDSU football and UND hockey. He was also a talented woodworker. His favorite hobby was golf. As a lifetime member of the Fargo Country Club and also a member of the Saddlebrook Men’s Club, he made many lasting friendships on the course. At the age of 83 he had a hole in one while golfing in Florida. His greatest joy was his family. He was a devoted husband, father, and grandfather. He left us with a lifetime of wonderful memories. We will miss him dearly. He is survived by his wife, Irene; his three daughters, Tanis (Mark) Bartholomay, Minnetonka, MN, Alison Johnson, Eden Prairie, MN, and Kathy (Phil) Duginski, Moorhead, MN; five grandchildren Alaina (Dave) Eckwright, Tricia Bartholomay, Matt (Jasmin) Duginski, Melissa (Ellery) Bresnahan and Mike Duginski; and three great-granddaughters, Hailey and Brooklyn Eckwright and Scout Duginski. He is also survived by his brother Erwin (Arlene) Johnson, Peoria, AZ, his sister Harriet Brown, Moorhead, MN and many nieces and nephews. He is preceded in death by his parents and brother-in-law Dr. Glenn Brown. A private family service will be held. Memorials are preferred to a charity of their choice.

Lyle's Video Tribute can be viewed here: https://www.tributeslides.com/tributes/show/P94GDF5QZXDCHFFY Lyle Johnson, 91, of Fargo, died on Saturday, May 30, 2020 of Covid-19. Lyle was born on April 13, 1929 to John and Nettie (Nedrebo) in Fessenden,... View Obituary & Service Information

The family of Lyle Gordon Johnson created this Life Tributes page to make it easy to share your memories.