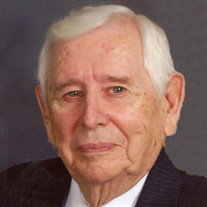 The funeral service for Louis will be streamed at 1pm, Tuesday, June 2, 2020 and available after at the following link: https://vimeo.com/423676155 Louis's Tribute Video can be viewed here: https://www.tributeslides.com/tributes/show/HKSPMNB5H5BRGGJD Louis I. Larson, age 95, passed away peacefully at his home on May 27, 2020. He was born on August 27, 1924 to Lars and Inga Larson in Galesburg, North Dakota. After graduating from high school, he attended North Dakota Agricultural College for two years before being drafted into the US Military. He was a World War II veteran, serving state side in the Air Force for two years. Following his service, he returned to NDSU, graduating in 1950 with a business degree. He married Joyce Bye on November 5, 1950 and they made their home in Fargo, North Dakota. He was employed by NDSU before making his career as the operations manager at deLendricies for thirty years. Louis was an active volunteer for Prairie Public Television fundraising campaigns, and the Sons of Norway Sunday morning breakfasts. He was also a member of the East Gate Masonic Lodge, becoming a Grand Master. Later his volunteer passion became the El Zagal Shrine, serving as Potentate in 1990. He was also an active member of the Shrine Oriental Band. He truly believed in the mission of the Shriners Hospitals for Children. He was a lifelong member of First Lutheran Church in Fargo, and the American Legion SB Aason Post 210, in Galesburg, North Dakota. In retirement, Louis and Joyce enjoyed spending their winters in Mesa, Arizona and their summers at their Cotton Lake cabin. Louis and Joyce would have celebrated 70 years of marriage this November. Louis is survived by his wife Joyce, two children, Randy Larson, Diane (Kip) Erickson and daughter-in-law Jill Larson. He is survived by six grandchildren: Stacie Frandrup (Justin), Jonathon Erickson (Sadie), Joshua Erickson (Jen), Jonathan Larson (Melanie), Jacob Larson, and Amy Larson-Sperling (Joshua). He is also survived by twelve great-grandchildren: Josie and Rylie Frandrup, Liv and Hadley Erickson, Bryce Verkeuhlen, Liam and Kellen Erickson, Devon and Dominic Muscha, Drew and Kiah Larson, and Felix Sperling. He was preceded in death by his parents, seven siblings, and his son Curt. Services will be held at Hanson-Runsvold Funeral Home in Fargo, North Dakota and live streamed on their website on June 2, 2020 at 1:00 PM, with visitation at 12:00 PM. Burial and military honors will follow the funeral at 3:30 PM at the Elm River Cemetery in Galesburg, North Dakota.

The funeral service for Louis will be streamed at 1pm, Tuesday, June 2, 2020 and available after at the following link: https://vimeo.com/423676155 Louis's Tribute Video can be viewed here: https://www.tributeslides.com/tributes/show/HKSPMNB5H5BRGGJD Louis... View Obituary & Service Information

The family of Louis Ivan Larson created this Life Tributes page to make it easy to share your memories.

The funeral service for Louis will be streamed at 1pm, Tuesday,...

Send flowers to the Larson family.