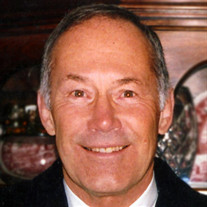 Louis A. Emerson passed on to his eternal home June 10, 2019. He was born in 1930 in St. Paul, MN, the son of Elizabeth D. and Louis A. Emerson Sr. He graduated in 1948 from Cretin High School and from St. Thomas in 1952. He was commissioned in the U.S. Air Force and was the Armament Officer of the 12th Fighter Bomber Squadron in Korea. He married Lois Vester in 1957 while working for IBM in Minneapolis. Lou opened the Fargo office of Dain Kalman in Fargo, in 1964. In 1970, he was promoted to branch manager of the Dain home office in Minneapolis. Subsequently, he specialized in private placement of government subsidized housing. Lou formed his own investment broker company in 1977 in Fargo. Lou and Patty Corwin were married in 1985. Lou is survived by his wife, Patty Corwin; daughter, Michele “Shelly” Gunderson (Greg), Mandan; son, Clint Emerson (Barbara), Zurich, Switzerland; daughter, Katie Corwin Hasbargen (Matt), Fargo; son, Ben Corwin (Stephanie), Fargo and grandchildren; Lexi Gunderson, Bismarck; Nickolas Gunderson, Bozeman, Montana; Alexander and Nicholas Hasbargen, Fargo and Sutton and Zoey Corwin, Fargo; sister, Roz Hoffman, (FL) and many dear nieces and nephews, extended family and special friends-a testament to the kind of loving, loyal, dedicated, humble man he was. Four of his 5 sisters preceded him to their heavenly home; Betty Lou, Jeanne, Joan and Patty. “Be always the Joy (and Blessing) to others, that you have been to me.” With grateful hearts we thank all the dedicated caregivers and medical staff for their compassionate help for Lou over many years; especially the Veterans Administration and his loving soulmate, Patty-"God's Angels On Earth". In lieu of flowers, donations may be made to the ND Honor Flight for Veterans (PO Box 644, West Fargo, ND 58078) or the Salvation Army. Visitation will be held from 3:30-5:30 pm followed by a Celebration of Life at 5:30 pm, Monday, June 17 at Hanson-Runsvold Funeral Home, Fargo. A Memorial Mass for family will be held at St. Mary’s Cathedral, Fargo. Interment will be in the ND Veteran’s Cemetery in Mandan, ND later this summer.

The family of Louis Albert Emerson created this Life Tributes page to make it easy to share your memories.

Send flowers to the Emerson family.