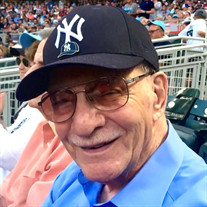 Louis (Louie) William Civilla,95, of Fargo, North Dakota, passed away peacefully on February 20, 2021. Louie was born February 1, 1926, to Joseph and Maddalena Civilla in Fargo, ND, and attended schools in Fargo. Louie enlisted in the United States Navy in 1943 during WWII and was reassigned to the United States Marine Corps as a Fleet Marine. He was honorably discharged in 1946 after serving much of his military time in the Pacific Theater. After being discharged, Louie married and had two wonderful children, Stephen Louis and Linda Janelle Civilla. Louie dedicated his career to the railroad industry and was employed by the Northern Pacific and Burlington Northern Railroads. He later married Keziah (Kay) W. Wyatt on September 23, 1983, until August 20, 2010, when she peacefully passed away. He was preceded in death by his wife, Kay, his parents, brothers Joseph, James, John, and Anthony, sister Theresa, and his stepson Wade Wyatt. He is survived by son Stephen (Debora) Civilla and daughter Linda (Lee) Massey; grandchildren Angela (Jason) Caron, Jeffrey (Heather) Hertel, Jason Hertel, Derik (Laura) Civilla, Brian (Sherry) Civilla, Louisa (Frank) Craven; two step-grandchildren, Travis (Anne) Wyatt and Carrie (Seth) Karkela; and numerous great children, nephews, and nieces. Louie was known as an unbelievably kind, gentle, and loving man to all and especially compassionate toward those in need. A true fan of sports and, in particular, a great follower of baseball. Louie could frequently be found wearing his baseball cap around town or faithfully watching his favorite team on television, the New York Yankees. He also loved watching his NDSU Bison and tracked their success for decades. He was also known to dominate the crossword puzzle world with perfect completions on nearly all that Louie challenged. Louie touched many more lives than he ever knew, and his gentleness will be greatly missed but not forgotten. A Celebration of Life of Louie will be announced later on in the year.

The family of Louis William Civilla created this Life Tributes page to make it easy to share your memories.

Send flowers to the Civilla family.