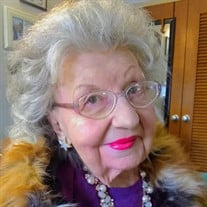 Funeral Service for Lorraine can be viewed here: https://vimeo.com/423199942 Lorraine Annabelle Roppe, 95, beloved Mother, was called to her eternal resting place on Sunday, May 24, 2020 at Rosewood on Broadway in Fargo, ND. Lorraine entered this world on December 27, 1924 in Newfolden, MN, born to Charles and Amelia (Linstad) Nelson. She was raised and attended school in Newfolden where she graduated from high school. On August 26, 1950, Lorraine married Thorfen Kenneth Roppe who was in the Army at the time. Lorraine really enjoyed being a homemaker, a wife, and a mother to their two daughters, Janet Lynn and Mary Kaye. She also attended and graduated from Interstate Business College in Fargo after which she worked as a legal secretary. Lorraine was also a model for Merle Norman for a short time with her friend Maxine Mich and worked in the fabric department at the Northport Ben Franklin store. Lorraine was skilled at needlework, enjoyed crocheting, gardening, painting, housework, sewing, quilting, baking, and cooking. She was a member of First Lutheran Church in Fargo as well as their quilting auxiliary and also the Teamsters Ladies Auxiliary. Her family was blessed to have such a devoted and loving Mother and she will be deeply missed. Lorraine is survived by her daughters, Janet Lynn Roppe and Mary Kaye Roppe both of Fargo; and sister, Beulah Olson, Fargo, as well as many nieces and nephews. She was preceded in death by her parents – Charles and Thea (Linstad) Nelson, husband, Thorfen Roppe, sisters – Marie Dahl and Ivadell Ott, brothers – Edwin Nelson and Robert Nelson. A funeral service will be at 2pm on Thursday, May 28, 2020 and also streamed on Hanson-Runsvold's website.

The family of Lorraine Annabelle Roppe created this Life Tributes page to make it easy to share your memories.

Send flowers to the Roppe family.